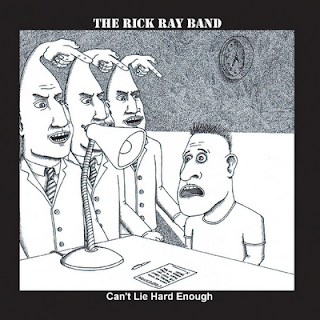 More AOR (Album Orientated Rock) and brighter than their previous album, Rick Ray proves to show that there’s no stop sign for him and he’s become more adult like and has created a symbolism for him and his band that is a retrospective sound of the ‘70s and early ‘80s of Arena Rock that has become a strong resurrection for 2011. Now opening for artists/bands like; Robin Trower, MSG, and Lynch Tower at the House of Blues, they began to really show their true colors not to surprise the audience, but give a full-length high voltage that may have gotten a huge kick and Can’t Lie Hard Enough is one of them.

With only 13 tracks on the album composed by Rick himself with his southern rock vocalization which is almost in the realm of Molly Hatchett meets Triumph’s Allied Forces-era into the world of another dimension. The most unbelievable thing on Can’t Lie Hard Enough is almost a spiritual journey on politics, dream land sequences, revenge for cheaters, and a criminal on the run. It makes it very mind-blowing and yet has a very diversion on drawing the line on the sand by making across to see which is cool and uncool.

Yet while there’s a lot of virtuosity and showing no stopping at the red light, mostly the band really is tightened like a rope with magnificent results. This gives them a huge pat on the back defining the sounds of prog, blues, fusion, and hard rock mixed up together into interesting compositions. The roaring sneer of I’m a Vagrant, the straightforward Bad Company rocker Gotta Be and the opening sax catchy title track that gives Rick Schultz a chance to shine, catches a fierce and tasty touches of Frank Zappa’s Apostrophe and Over-nite Sensation-era.

But there’s a heartfelt melodic ballad to Can’t Lie Hard Enough on I’m Nobody and View From a Train that gives Rick and his boys a chance to calm down as bassist Wally Spisak does his Squire bass lines to create a jazzy atmosphere as All I Want is Peace gives way to various time changes to huge guitar lines with rhythm and lead guitar licks along with a swirling keyboard work that is almost out of a heavy version of Close to the Edge as Rick does his homage to Keith Emerson on the track before guest keyboardist Sam Guinta of Syzygy comes in to create a haunting and moody scenery of the 6-minute, Propaganda.

Spinning Round and Round is an acoustic emotional tone as if Rick is paying tribute to Kurt Cobain on Nirvana’s Polly Says but Wonderful makes it a fast speeding train car that goes over 600 miles per hour with a stop-and-go sign to make it a gut punching whirl as Judge and Jury is certainly one to give a view on the issues that the law would give you in the touches of 38 Special meets Rush’s Power Windows-era and is certainly to keep an eye out for a bluesy yet raunchy look of the courtroom and the issues they deal with. Making this a comeback for Rick Ray to be a huge enjoyment for him and making this a stunning yet embracing tradition of the resurrection of AOR.
Posted by znathanson at 3:33 PM