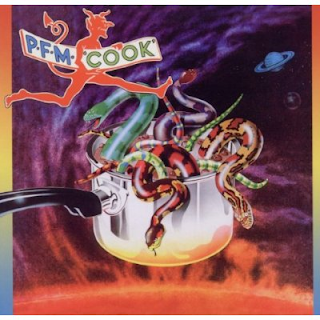 We have here the holy grail of the band’s live set in a 3-CD set done by the wonderful people from Esoteric Recordings and let’s just say this gets a lot better than expected. Featuring the original album known as Live in the USA in 1974, Cook sees PFM achieving cult status in the States as they were getting a lot of recognition thanks to Greg Lake, the band recorded two shows in Toronto and New York City at Central Park. So does the icing fits well on the cake? The answer is yes!

The band at the time was on tour promoting their second English album from the Manticore label, The World Became The World back during the Summer of 1974 as their previous album Photos of Ghosts was in the Billboard Album Charts peaking at no. 200 as they featured songs from their two English albums and one from their Italian debut, Storia di un Minuto. While the original album was a treat for listeners, the other 2-CDs is the full performance of the band’s recording at Central Park and hearing it from start to finish, is like fitting the shoe properly well.

This was the performance that broke the camel’s back and for PFM a huge turning point for them at a music festival at the big apple, along with opening for bands such as ZZ Top and Santana to name a few, The five lads from Italy were putting a huge stamp in the rock market and with help from FM Radio playing Celebration alongside support from the late John Peel and Bob Harris of the Old Grey Whistle Test, the first two English albums brought a lot of magic that created a mysterious yet breathtaking experience when you hear this unbelievable live performance. From Franco Mussida’s haunting guitar solo that features Spanish and classical elements to the 17-minute dazzling live improvisation version of Is My Face on Straight, you have embarked on an amazing journey of the band having a grand old time.

You can tell that the audience is completely blown away and you are in the crowd shouting and applauding and chanting PFM to lend support and knowing that the band has done one hell of a job in America. Even Dove…Quando still carries the mystique fusion-sque with Flavio Premoli’s homage to Herbie Hancock for an introduction and the folky-sque Just Look Away could ever have been written for a historical painting. The most important thing about these full live recordings at the Schaefer Central Park Music Festival, is that you are in the front row of PFM’s thunderstorm performance.

From the last two tracks on the third disc of the medley on Alta Loma Five ‘Til Nine (William Tell Overture), it is no wonder that the band could have been bigger than ELP and Genesis in their Symphonic and Fusion triumph. From Patrick Djivas wonderful Pastorious bass lines, Franco’s virtuosity keeps the groove going on with his guitar while Flavio brings a jazz atmosphere on the Rhodes and the mellotron to set the mood before Mauro Pagani comes in and gives the audience an explosive violin solo as they speed up the time signature before going into the race track with the William Tell Overture as a finale.

But on Celebration / The World Became The World, this is where the puzzle begins to be completed with the final pieces added. This time its drummer Franz Di Cioccio’s moment to shine as he does a combining thundering drum solo. He really carries the similarities of Billy Cobham, Elvin Jones, and John Bonham combined into one. And alongside the prog drummers of Bill Bruford, his drumming is so powerful, you almost couldn’t stop playing this expanded edition, because it’s so beautifully done and no one could pull the plug from this band as they keep the train chugging for an encore.

As I heard the original album again for three times already, I realize that it’s almost going back into a time machine and heading towards the early ‘70s and looking at the beautiful tower of pisa set to an alternate soundtrack and seeing how the tower would move to Italian Prog. It’s not to say that this is not bad quality, but almost an excellent sound quality and hoping that Esoteric can release the full-length Toronto performance as well. So let’s hope to see what the label has up their sleeve and seeing where PFM were at this moment in history and the 3-CD set is a must have for any Prog or PFM fan to sink their shark teeth into.
Posted by znathanson at 12:49 AM