Blackfield - Welcome To My DNA 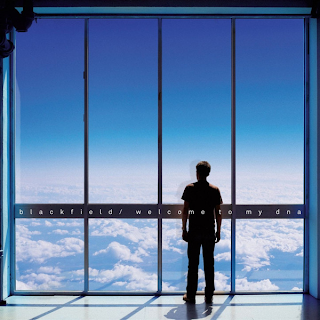 “Fuck you all/Fuck you/Fuck you all/Fuck you/I don’t care anymore” Now that’s a lyric right there from the song Go To Hell which Aviv dedicated this to his parents. If John Lennon was alive, he would have written something like this and give the middle finger to the corporate music scenery that’s out there on the top 40 hits that Ryan Seacrest is doing. There must be some idealization that Steven Wilson and his partner-in-crime Aviv Geffen, decided that it was time to reveal the darker side of the majestic crime they must have to come face-to-face with. What is really mind-blowing is that the two musicians have created something that is out of the blue and something that might give you goose bumps.

While this could have been some sessions that was left off from Porcupine Tree’s In Absentia and emerging into the post-progressive rock sounds of the 21st century, Steven Wilson is one of the finest musicians ever. Even though he's dipping his toe in the water with Porcupine Tree, composing another solo album, or working on a new 5.1 stereo mix on the 40th anniversary King Crimson reissues and the deluxe edition of Caravan’s In The Land of Grey and Pink coming out this summer, Blackfield is one of the best projects that he and Geffen have been around since forming in the year 2000. Wilson’s lyrics are very much in the realm of Lennon and Thom Yorke in his song-writing material. Like a sequel that has a candle lit for a very long time from the indie prog/psych label of the Delerium-era in the early ‘90s, Blackfield have shown a lot of energy and their new album Welcome To My DNA is warm handshake for the two members to receive a warm welcoming.

The compositions are very haunting, touching, soaring, uplifting, and views in the research to show the eerie qualities in the songs that Steven Wilson and Aviv Geffen have endured on. Like a rumbling volcano that is about to erupt like batshit crazy, both of the two musicians are like mad scientists working on some weird experiments and the songs on DNA deals with; a touch of isolation, against your parents, emotional bearings, and war. If you listen to the songs from start to finish, they can be very hard and disturbing, yet the beauty on here is showing where we can push the button and see where the fire can lead to. The middle-eastern symphonic dramatic touches on Blood, is a perfect ingredient on Baroque Pop meets Raga-Rock meets Hard Rock of this unbelievable touch that has not been heard before. You can hear the influences on the Revolver-era in a sinister mix of the percussion ala Raga style! This could be Aviv’s answer to PT’s The Incident as if it was made to be a 2-part epic and this song is one of the highlights on here.

While the string-quartet Floyd-sque introduction on saying farewell from the introduction of the opener Glass House has an angelic call to move into a new beginning and start a new chapter, the psychedelic orchestral rocker, Rising of the Tide is one of the most romantic pieces of Blackfield’s music. Like something out of the Wish You Were Here sessions with a melodic soaring sound, dealing with being isolated and not trying to deal with the situation of going crazy and your life is like a story as it goes forward for a long, long time. By now, you’ve probably seen the music video on YouTube on the alternative acoustic upbeat tempo on Waving, which pokes fun at MTV as the two members are in a computer-animated puppetry shows them having a dark sense of humor.

The lush and symphonic momentums, makes it a really retrospectale adventure that Steven Wilson brings to the table. But here on Dissolving With the Night, almost you can feel Wilson in the booth fighting back tears as he gives his heart and strength dealing with the issue on pain and sorrow, this almost epic film score that is very Danny Elfman-like in the realms of the Batman soundtrack but with a mournful ballad while the sea breeze melancholic sounds of the Beatles Abbey Road meets Radiohead’s OK Computer comes into the picture during On The Plane. Aviv Geffen’s haunting mournful composition Zigota, which is almost a tribute to the late former Israeli president Yitzhak Rabin in which Geffen got to meet, before he was assassinated in 1995, is a tribute to the man who could have brought peace to Israel and end hate, death, and war. It brings the atmospheric new-age sounds of calmness with ‘70s guitar sounds, mellotron in tears, and in the realm of early Tangerine Dream meets Sgt. Pepper meets The Bends.

The closing alternative indie touching folksy rocker, DNA is where the song deals with what we have done from here in the modern world and looking at the mistakes that we made and learning how we can forget the past and move into a bright and new day that awaits us. Welcome To My DNA is not just an album, but more of a sequel to Dark Side of the Moon that Geffen and Wilson would have made the members of Pink Floyd very proud of, but dealing with the issues in where we are right now, its one of those albums that needs to be played over and over again to get Blackfield a lot of recognition in the prog community and let me be the first to say that this is the perfect icing on the cake for a comeback that is right on for desert for Blackfield to serve after dinner for.
Posted by znathanson at 1:22 AM