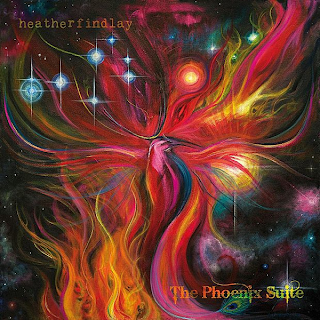 After Heather Findlay decided to leave Mostly Autumn to pursue a solo project, it would have been a hard choice for her to leave one her fellow comrades behind to do something that was different outside of the box and into the mysterious land of the unknown. So the question that remains, can Heather pull it off? The answer is yes with her first extended play solo debut album, The Phoenix Suite and this is her moving away from the folksy and neo sound of her original band that is heavy, experimental, bluesy, and Floyd-esque into different boundaries.

This was her saying, “Let me try something different than what I’ve been doing with Mostly Autumn and give a real kick in the gut with a solo project that would change the fan base of Mostly Autumn while taking a darker yet moody approach.” And let’s just say she wasn’t going to pull a rabbit out of someone’s ass, but to go into an Odin Dragonfly approach with the Phoenix Suite on these unbelievable five tracks that let the listener know that Heather has only just begun her solo career with a bang. Beginning the suite is the alternative Stone Temple Pilots homage with Red Dust. This track was interesting at first, because Heather originally was almost a mysterious vocalist from MA, but on this track she went from being that into more of a combination of Scott Weiland meets Roger Waters lyricism.

After that, she goes back into the eerie and haunting atmosphere with the spooky neo-prog sound with help from Roger Waters guitarist Dave Kilminster who creates a thumping and yet Gilmour-like guitar virtuosity to set the tone for Heather’s vocalization to create a bone-chilling edge to the composition while Cellophane has more of a real driving sound as Dave makes the guitar into a catchy rhythm sound as Heather takes the vocals into the highway alongside with Alex Cromarty’s alternative thumping drumming sounds in the steering wheel. Meanwhile, Seven is back into the sinister ballad but this time in the realm of Renaissance’s Ashes are Burning-era meets Odin Dragonfly’s Offering of the 21st century as Heather takes the fantasy into a disturbing and mystique level as she takes the song to deal with life living in this destructive yet new America that we are living in right now.

You can tell that Roger Waters is watching her like a mentor and giving the torch to her and moving forward with the Floyd sound and his lyrics with her. Heather Findlay is the new Roger Waters of the 21st century as she closes the suite with the middle-finger message to the men who abused women on Mona Lisa. You have to admit Heather isn’t going Justin Bieber on our asses with this song, but giving it a real kick in the gut while Dave’s sneering guitar solo fills the scenery while bassist Steve Vantsis and Alex Cromarty on drums follow alongside Heather as she takes the musician’s a rough and hard subject issue on abuse and domestication that the women must face, and this song has a powerful and strong message to go with it.

Now is it her greatest work yet? No, but it’s a good start for her to get her solo work going like putting the wheel on the barrow. But from what I’ve heard on The Phoenix Suite, this will be a huge bench-mark for Findlay and the fans of Mostly Autumn and Odin Dragonfly to see where she is going into this new direction. Let’s see what she has up with the follow-up to the suite during this year or next year and where the direction she is going to go with for years to come.
Posted by znathanson at 9:07 PM