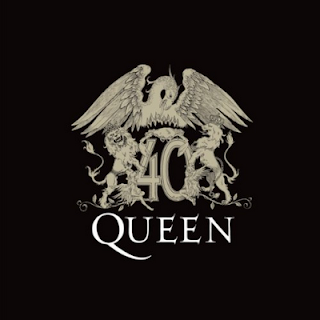 For 40 years, Queen has become one of the most important bands to come out of the hard rock and heavy metal genre. When it was time for the band to move from EMI to Island Records due to legal issues, it was time for the band’s catalogue to give the albums a huge reissue treatment. Starting off are the first five albums with; Queen, Queen II, Sheer Heart Attack, A Night at the Opera, and A Day at the Races. Now for me, I would love for the band to release the Rainbow, Hammersmith Odeon, and Hyde Park performances that had previously bootlegged; it’s about time that it needs to be on Blu-Ray/DVD for the first time including the never-before-seen footage of Seven Seas of Rhye that they performed on Top of the Pops in 1974. But since they were an early beginning of Stadium Rock and gave a huge embark and sound that would surprise fans and up-and-coming new generation of listeners to sink their teeth into; it would be quite be a musical and magical adventure. For us, it’s not just Freddie’s stage antics or his flamboyant looks; it’s the music that remains the soundtrack of our lives. 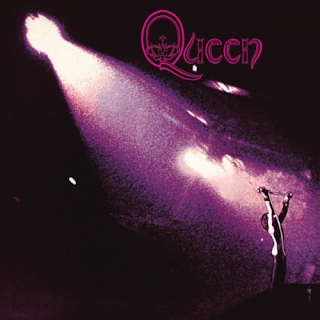 Now since they received the guilty pleasures-era of the late ‘70s/early ‘80s to go mainstream, it’s always the golden-era of Queen who was a band that gave glam and metal, a fierce sounds that was different than the commercial songs in what people think of the band. The first sole self-titled debut album released in 1973, was a starter for them. The rumbling guitar driven sound that Brian May does on Keep Yourself Alive still sounds like a roller-coaster ride that is out of this world and more likely to give the energy drink a huge boost while fierce and sneering beauties of Great King Rat, Liar featuring John Deacon’s first lead vocal on the line, “All Day Long”, and Roger Taylor’s homage to Led Zeppelin with Modern Times Rock & Roll with a punk attitude, proves that they can take the listener one step beyond. But the balladry has always kept them on their back with The Night Comes Down and sunset lukewarm touches on the crisp folksy touch on Doing All Right. The first album was a beginner’s album for them, and they were just getting started. 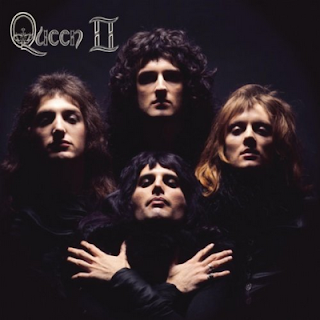 Queen II, released in 1974, has become a cornerstone for fans alike including myself one of Queen’s finest work. The early beginning of Progressive Metal is proved here from beginning, middle, and end. Roger Taylor’s screaming vocals, Brian May’s mystical guitar lines, John Deacon’s bass lines, and the soprano vocal sounds of Freddie’s voice. An under-rated masterpiece, the album is an explosive adventure. From the mourning heartbeat guitar virtuosity on Procession, the glorious punch in the stomach compositions of Father To Son and White Queen (As it Began), to the ballad folk romanticism of Brian May’s view of loss on Some Day One Day. Then Roger comes and gives the domestic mother’s point of view, the middle finger with the attitude rocker, The Loser in the End while it all comes to the Ogre Battle 17-minute suite.The high soaring screaming vocals come in, then Brian May’s battling guitar lines, and Freddie’s venomous vocals come in as he tells the tale of the Battle between good and evil as the background in the midsection becomes a bloody gore-fest and then the aftermath as it goes into the tempo dance beat tribute to the Richard Dadd Painting of the short medieval rocker, The Fairy-Feller’s Master Stroke while the sorrowing ballad of Freddie on piano sends chills on your spine with Nevermore as it goes into the early beginnings of Bohemian Rhapsody with the 6-minute mini rock operatic story of The March of the Black Queen through different time changes and preying to the Queen’s majestic feet as it climbs up into the heavens with the angelic yet flying through the skies with Funny How Love Is, could have been a sing-along song for fans to give praise to and the closing, Seven Seas of Rhye is a thundering pound cake that is a touch of Queen’s vocalization and power metal like you’ve never heard before. 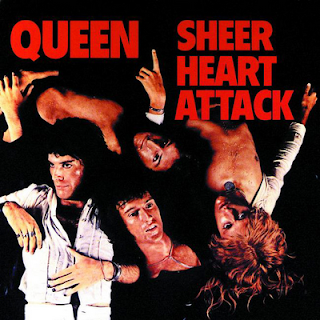 Cut to Sheer Heart Attack, the follow-up to the second album released in the same year, sees Queen going into more of a glam pop flavor, but still keeping the metal riffs in there. Still it’s a wonderful album and never lets you go. But this was the album that brought Queen into commerciality and in the mainstream. Brighton Rock is still a killer introduction featuring Brian May’s thundering guitar solo in the midsection that gives him, his moment to shine and let the band cool down and give the man a lot of props as he nails the frets and rhythm like a chainsaw. The single and pop touches on Killer Queen, is very 16th century in France to pay tribute to the late Marie Antoinette, was the band’s first hit single to reach in the states and receiving a lot of attention.

With the hard rock values in there, they still got it. Alongside Tenement Furster, the early beginnings of Stadium Rock on Now I’m Here, and the retro Thrash Metal beginnings, booming 600 miles per hour on Stone Cold Crazy, would have had Metallica bowing before their gods while we see the band going into the humor table with the Ragtime-era of the ‘20s on Bring Back That Leroy Brown and the love-songs touching in there with She Makes Me (Stromtrooper In Stilettos) and In The Lap of the Gods…Revisited are lost classics. 1975, the year that Queen finally broke the door down with their highly praised masterpiece, A Night At The Opera. This was the cornerstone that put them on the map to become superstars. 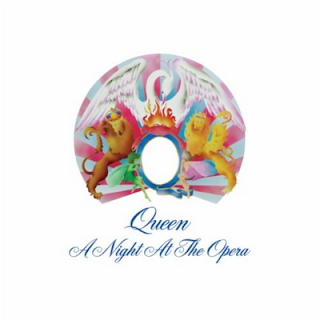 So while Bohemian Rhapsody and You’re My Best Friend have been some considered overrated and played a dozen times, its time to focus on the other songs on the album that deserve some credit for a good time and a lot of recognition. The quirky homage of the Salad Days-era on Seaside Rendezvous and Lazing on a Sunday Afternoon has their funny bones tickled as the raunchy erotic bluesy rock touches of sexual fantasies on Sweet Lady makes it almost an anthem to Queen’s sound while Freddie becomes pissed with a fuck-you attitude towards Queen's former manager who ripped him off on the vicious and tension rocker, Death on Two Legs. The acoustic sing-along sci-fi folk upbeat tempo of ’39 has its shining glory as the piano ballad romantic love song to Freddie’s wife Mary Austin on Love of My Life, is one of the most emotional killing tracks in Queen’s history and Roger Taylor’s obsession of driving down the highway with I’m In Love With My Car makes it almost an anthem to all of the Car Sponsors. The 8-minute Prog-dooming yet haunting touches of The Prophet’s Song is sinister and yet beautiful to keep you going for the test of time. 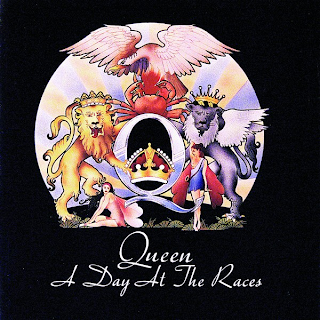 Like a sequel to A Night at the Opera, A Day at the Races in 1976, still carries the fourth album like a flaming fire that keeps on going with the theatrical boundary, church songs, and symphonic quantities. Not to mention Freddie dressing up for the ballet. The fierce opening on Tie Your Mother Down is still one of the most dynamite shuffling rocking compositions to get you going while the harmonic melancholic emotional touches goes up with; You Take My Breath Away, Teo Torriatte (Let Us Cling Together), You and I, and Long Away. The humor is still in there with the dances of ¾ on The Millionaire Waltz and the dressing up tribute to the Glam Rock scene and Mercury’s own image as well on Good Old-Fashioned Lover Boy, but it’s the gospel rocker Somebody To Love that is considered a live favorite and still is one of Queen’s favorite songs that is still a piece that refuses to die. A Day at the Races was one of the biggest achievements for the band to keep the music growing for the past, present, and future.

To a part of the reissues, the bonus tracks that are on the second disc on each of the five albums like in an EP format, could have been a little bigger for 10 tracks instead of 5 or 6 tracks. You have the unreleased 1971 demoes of the band’s earlier beginnings recorded at De Lane Lea studios, Live recordings from Hammersmith Odeon in ‘75, the free concert at Hyde Park in ‘76, Earls Court in ’77 during the time they were promoting Day at the Races, BBC Sessions remixed, and Top of the Pops as well. While the singles of the pop-orientated flavor of Mad The Swine and the raunchy blues sounds of See What A Fool I’ve Been are interesting and mind-blowing, the a-cappella tracks on the operatic midsection track on Bohemian Rhapsody and the bouncy upbeat on Bring Back That Leroy Brown is quite fascinating including instrumental versions of the backing tracks on Seven Seas of Rhye with a never-before heard finale, and Tie Your Mother Down is worth exploring.

Queen’s music has made them from being an up-and-coming band into Stadium Rock heroes, the first five albums probably needs more of a huge deluxe edition format than just a 2-CD set, but we’ll see what the future might hold for Brian May and Roger Taylor. Now does it mean the reissues are terrible? No, but there should have been more than just an extended play second disc format. However, enjoy the music and let the night come down for you to experience the golden-era of Queen the way it was meant to be.
Posted by znathanson at 10:29 PM

As unreadable as ever. Surely a prerequisite of a "freelance writer", which you claim to be, is an ability to write? No? I assume you don't get much work.

I mean I get it. This blog is not everyone's cup of tea and no Jon I don't get much work. But for you, if you don't like the blog, then don't read it.