Summer Turns To Autumn: Progressive, Psychedelic, and Folk Rock from the Ember Vaults 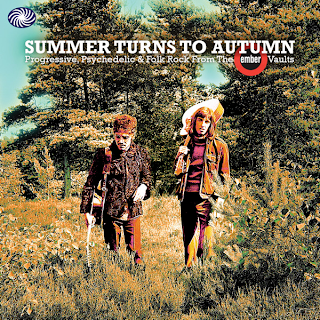 We’re back in the city of the reissue label Fantastic Voyage as they make a sequel to the obscure psych folk and prog sounds that was coming out of the indie label, Ember. Now I’ve always admired the welsh Prog-Psych Pop sounds of Blonde on Blonde and their glorified unsung masterpiece, Rebirth after moving from Pye to Ember to make a follow up to their debut album, Contrasts. This new compilation, which you could buy on Amazon MP3 and on iTunes as well, Summer Turns To Autumn: Progressive, Psychedelic, & Folk Rock From the Ember Vaults is a sequel to Looking Towards the Sky and is almost the second volume to see what the bag of Ember Records have hidden in store for us and it turns out there is more out of the frying pan and into to be cooked well done with a slice of toast to go with it.

While we give Fantastic Voyage credit to search in the vaults for these unearthed gems, the compilation takes the listener to an amazing journey of these rare unknown bands in the underground scene that never saw the day that never came for them, drawing from the sounds of the three genres, makes it a worth and magnificent piece of lost and hidden treasures to discover. From the glorified psychedelic pop dreamland sounds of the opening track of Blonde on Blonde’s Castles in the Sky, this isn’t your daddy’s prog tribute album per se. The surreal gems that are unexpected and could have given The Beatles a run for their money with Sgt. Pepper.

9:30 Fly’s psych-dance beat to the floor with Summer Days and the driving sing-along song that is a perfect drinking song, September while the Canadian garage rockers, The Dorians pay tribute to the Stax sound and Curtis Mayfield on Means and Ways while Knocker Jungle’s eerie acid folk comes into the picture with Oh To Be Free and the almost FM radio hit with a humoristic touch in the style of Seals & Crofts Summer Days, Not Even a Letter. Then we have Blue Beard who almost brought the attitude of the Nuggets proto-punk sound of Sly Willy and the anti-war protest love song with a mixture of middle-eastern folk and bluesy rock on God Save the World. But then The Dorians come back into the picture for a softer-psych pop flavor in a Beatle-sque way on Torch Song and the Back Street Band pay tribute to The Nice with acknowledgment in the style of a slowed-down version of Bonnie K on Daybreak.

However, the tracks have a boogie and wonderous adventures to make an adventure that was worth the wait including Polly Niles ‘60s tribute to the open road on the orchestral wah-wah psych ballad East Virginia, Blonde on Blonde’s emotional heartfelt song November really hits home and the people who were fighting for their country in Vietnam while they go hard rock on our asses with I Don’t Care taken from Reflections of Life. Milt Matthews Inc goes into a gospel ballad in his cover of Blind Faith’s Presence of the Lord, but it becomes a touching finale in the styles of Elton John and Bernie Taupin as Paddy Maguire pays tribute to the two as if he performs this James Taylor-sque beauty Lay Me Down at the Troubadour and receiving critical acclaim.

And while these 16-tracks seems like it may be interesting or un-interesting to some listeners, its hidden treasure does provide a lot of unexpected independent grounds for hopefully a third volume to see what Fantastic Voyage have up their sleeve of the lost gems that could focus more of the bands, just like Summer Turns to Autumn summing up the sound of the late 1960s.
Posted by znathanson at 12:04 AM