The Devil's Blood - The Time of No Time Evermore 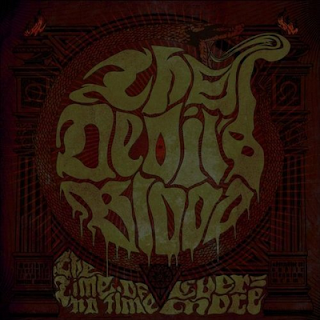 If the glass slipper fit’s well on Cinderella’s feet, then The Devil’s Blood The Time of no Time Evermore is one of the most high voltage debut albums to come out in the revival of doom metal and obscure progressive rock gems for the band to come out of the dead and giving us a hellish nightmare. Almost as this was the band’s stepped into the waters of the two genres and not knowing what they look like, will have a chance to settle the score to worship the Gothic boundaries and it’s quite a theatrical festival for them to come out of the graveyard with a bang. For people who are interested in bands like: Black Widow, Black Sabbath, and The Doors, it proves to be than a farfetched album with unbelievable songwriting, fierce musical boundaries, and rehab for the mental institutes to go apeshit when they sink their teeth into The Devil’s Blood music.

Anyone who wants to follow in the band’s footsteps, The Time of no Time Evermore is a ride into hell and crying out for mercy, but with an attitude and almost sounding like a psych-nightmare of the turbulence going into the terrifying waters 50 feet below. Vocalist F manages to provide a disturbing storyteller as she sings in a psych-metal way and gives the band creative freedom and does her touches of Grace Slick, early Ozzy, and Linda Hoyle of Affinity. From the occult guitar finger picking opening segue of The Time of No Time and the fierce driving force on Evermore, becomes almost like magic potion with a lot of ingredients that becomes a bubbling roar.

But one of the band’s interesting tracks is the haunting ballad The Yonder Beckons, it’s quite a twisted track as the stories of the mysticism and witchcraft in the minds of Edgar Allen Poe comes into the open air. Its post-apocalyptical storyline may have a combination of Black Sabbath’s Planet Caravan and Linda Perry featuring Grace Slick’s doomy alternative swansong duet Knock Me Out and qualifying female metal bands to capture the sound of the ‘70s metal/prog sound, it doesn’t have to be a boy’s sport, but to see how the female bands would carry the torches and see where the direction would lead them to. From the riff homage of the NWOBHM on Christ or Cocaine as F pays tribute to Rob Halford and Bruce Dickinson that manages cool duo guitar sounds and pounding drumming techniques, would make the song a perfect end credits to a delicious horror film while Queen of my Burning Heart would have made David Bowie wish he was in a heavy metal band.

Now if there’s some issues with F.’s vocals which people might cringe because of her voice (I love it), then the duo guitar sounds, fierce bass lines, and the drums really come into place. As I’ve mentioned before, the NWOBHM (New Wave of British Heavy Metal) carries the flaming torch to these guys and they really carrying it to the Olympics as if they are about to set the stadium to ablaze and makes the album a journey into uncharted territory. Not to mention the Irish jig rocker on Angel’s Prayer that carries the sound on the Vagabonds of the Western World-era of Thin Lizzy.

And now they’re carrying the epics to a standstill and the 11-minute finale, The Anti-Kosmik Magick, which is the only epic track on the album, is a little lacking, but that doesn’t say it’s a bad track, it needs a little polishing up and make the piece almost like 8 chapters on there. The song really needs a little bit of work, but it really kicks ass at the same time with militant, spaghetti western, and Ritchie Blackmore sounds filling the edge. You might want to keep a close on The Devil’s Blood and see what the long and winding road will lay ahead for them. For a band that carries the doom metal and obscure prog sounds, it’s quite clear that every musician might want to take note of them.
Posted by znathanson at 11:25 AM