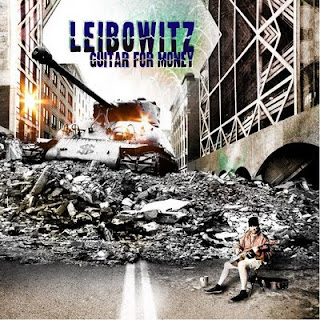 The concept of musicians using "free rein" on their first albums is quite a challenge. For an artist, they want to have a chance to get their song and music heard online for people to take notice whether it’s on Reverb Nation, Facebook, or on MySpace, in the realm of Jeff Tweedy, Brian Wilson, and John Lennon, it would be my taste of music hearing new artists to take chances and take a Quantum Leap for liftoff. And for Josh Leibowitz has been following in the steps of the three artists and of course, Matt Stevens as well. That and his debut album, Guitar for Money is a wonderful and heartfelt album.

Rooting in the acoustic and alternative rock sound almost influenced by Wilco, the tracks have almost an Indie sound and have been development since he’s been working on this for a good time with an acoustic guitar and psych-beauty for a sentiment. The title-track is the type of jumping upbeat tempo that would appeal to some who wants to appreciate this man for not signing to a huge record label as he’s saying, this is much better than doing stadiums and wanting to see what the road is beyond the horizon while Child of the Sun follows of the haunting sounds to those who admired Syd Barrett’s The Madcap Laughs as Flashbacks Halfway House of Horrors features a Garage Rock roar with a fuzz tone organ sound, ‘60s vibe guitar sounds, and a rumbling drum section while Josh’s voice is double-tracked to carry the Nuggets sound that would have gotten him a chance to perform on Little Steven’s Underground Garage.

The progtastic roars comes in like a blazing fire of Live With Yourself plays more of the psychedelic sounds of The Pretty Things S.F. Sorrow and Creation’s stamp of roaring guitar licks and their hallmark of using a bow to give their guitar a screeching sound, while the futuristic middle-eastern tango upbeat sound of So Fla So Good is an epic spaghetti western theme song. The quirky sense of humor of Pants gives more of the Beatle-sque sound of Rubber Soul as he goes back into the future with a bit of Jeff Wayne’s War of the World’s Forever Autumn and Genesis’ Get ‘Em Out By Friday that you will notice as he does an homage to the song with the song about survival as he uses the guitar and the synthesizer playing the melody together on The Here and Now, when you hear the pair of the two collide, you’ll know that this guy is paying tribute to the prog sounds and not ripping it off.

Like Matt Stevens, he’s got a long road ahead of him and for fans of Wilco, PG-era of Genesis, Beatles, Jeff Wayne, and the Syd Barrett-era of Pink Floyd, will enjoy this man’s music and decide where the line should be drawn, but for Leibowitz, his debut album is a beginning road for him to go on. Mixtures of Indie Rock, Prog, and Futuristic Rock? Not a bad idea after all!
Posted by znathanson at 11:58 PM

I was lucky enough to have Josh perform "Guitar for Money" over speaker phone so I could hear him preform it live. It was great! Get the CD you'll love it.