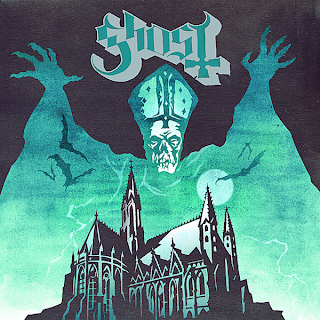 Let’s cut through the bullshit here, with a dosage of the occult and satanic metal that sets the soundtrack for either a slasher film or reviving the hammer horror films for the 21st century, it looks like Metal has received a warm reception of the two genres and a band that wants to remain nameless and not to mention looking like the occult that came out of Alan Moore’s graphic novels for a short story. Ghost, one of the finest and newest bands to come out of Sweden, has gotten something up their sleeve for their debut albums.

Opus Eponymous might not only scare the living shit out of listeners, but since releasing their first album this year on the Rise Above Records label, makes one hell of a record that not only is bringing doom and occult metal sounds back from the grave, but give the beast a slap in the face and a huge wake-up call saying, it’s time to attack and release the hounds of hades to attack. If Ghost is following in the footsteps of Angel Witch, King Diamond, Black Sabbath, and Pentagram, then this album and the front cover that features an evil pope lending an attack on the city, is a disturbing yet wonderful journey into uncharted territories.

The touches of fierce guitar lines, fuzz-tone bass lines, and haunting organ sounds in the realm of Black Widow have been slammed by so-called rock critics during the ‘70s in Rolling Stone Magazine, but now is intense, vicious, and emotional, while the lyrics deal with worshipping to Satan, betrayal, murder, rape, and celebrating the witches anniversary, well let’s just say you’ve got yourself one hell of a weekend to hang out with them as they release their venom and go with a bang of a revival from Ghost.

From the eerie atmosphere organ introduction of Deus Culpa which is homage to Pink Floyd’s Celestial Voices from A Saucerful of Secrets to roaring bass intro into a mind-boggling insane ride into a glorious touch of ‘70s retrospective rock sound on Con Clavi Don Dio, makes you realize that this isn’t your daddy’s heavy metal album. The chugging rhythm sections make the pieces like a rock opera in the right on Ritual, the reminiscent of thrash on Elizabeth, the drum section giving it a real pounding in the gut that would be told through campfires and scaring kids on the Uriah Heep meets Coven touch of Stand By Him and Satan Prayer.

Yet on Death Knell, which carries the torch of Black Sabbath’s first five albums, has a very catchy tempo while the guitar goes into a haywire mode followed by a Geezer Butler-sque Bass metal intro as they go into the Horror mode with Prime Mover that is almost straight out of The Wicker Man. And the closing track which is a home run for Ghost to hit the ball in the park with: Genesis (no pun intended) starts off like something out of Argento’s Tenebre in the realm of Italian Prog maestro’s Goblin and Metamorfosi. Opus Eponymous is the album that you might want to take note of.

Ghost has a long road ahead of them. It’s a good album, not the best, but the production and the compositions are spot on and what great performers they are and someday, they might open for Metallica one day in the future or for Blood Ceremony and lets the fans of Doom Metal know, that the music is still going strong than ever since 1970.
Posted by znathanson at 10:01 PM