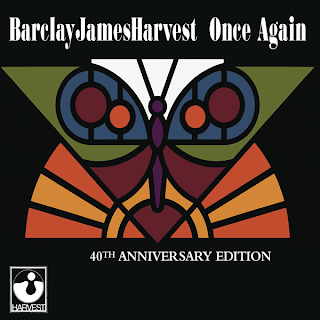 The loss of Woolly Wolstenholme, keyboardist of Barclay James Harvest and founder of Maestoso, has been a tragic day for the Barclay James Harvest camp after he committed suicide last year due to a mental illness that he was suffering from. And now there are only two members left, John Lees and Les Holroyd. So far as since the passing of drummer Mel Pritchard and now Woolly, the show must go on and John Lees would let Woolly know that he will carry the BJH flag wherever he goes and wherever he takes it to, he’ll know that he will always be with Woolly forever and ever.

Now let’s get to the good stuff. It’s been nearly 40 years since Barclay James Harvest have released one of their cornerstone albums in the 1970s with their second album, Once Again, a pastoral and orchestral album that is finally getting the recognition and still does to this day after it was released in 1971. Considered as one BJH’s finest work to this date, the songs are still a touching sentiment and very heartfelt with only eight tracks and let’s not forget the seven bonus tracks that were recorded during the Once Again sessions to give it almost the BJH treatment. The band really has craved the swarming beauty of the mellotron as if to give it the symphonic mode rather than being a rockabilly album.

While the second album was going to be a huge follow-up to their previous sole self-titled debut album which was recorded by the Barclay James Harvest Orchestra under the conducting button of none other than Robert John Godfrey of The Enid fame. But soon it was about to be a war of words between him and the band themselves as they were fighting over Godfrey’s score as he and Harvest were having creative difference between the two as tension would rise making the album before they drifted apart after the album was released.

The times might have changed between the two and while Godfrey successfully won the lawsuit against the band to retain full credit on Once Again, it might have been a relationship gone horribly wrong in a messed up way. But when you go back and listen to the second album again, it’s almost like a watershed flower growing to rise and see the sun in all of its glory. From the swirling pastoral guitar sounds and mellotron shed beauty of She Said, to the tribute of the folk-lore stories of Tolkien and C.S. Lewis in the ballad orchestral tinged beauty of Galadriel and going through the moral change of a love song with Vanessa Simmons, for these songs, it shows that we don’t give a damn about the lawsuit and praise the album for what it’s worth and why it was completely ahead of its time.

The lakes in the river with mellowing guitars, the orchestra, and the keyboards are rolled up into one with climatic finales which dip into a haunting yet lukewarm touching sense of beauty which is evidential on the fan-favorite, Mocking Bird. And then, Barclay James Harvest goes hard rock into uncharted territory in a disturbing bluesy realm of Deep Purple with Woolly’s composition, Ball and Chain (Not the Janis Joplin version) while the band decides to come back into the English country side in the finale with a little help of country rock sounds to add to the sound of Once Again by giving it a beautiful closing curtain call encore on Lady Loves that shows John Lees love of country and folk music as for the eerie yet twilight zone piece of Woolly’s classic, Happy Old World, makes the band write an anthem for Earth Day.

As mentioned before, the seven bonus tracks features the non-orchestral version of Mocking Bird and Galadriel, the Symphonic overture dramatic beauty of Introduction – White Sails (A Seascape), the homage of Led Zeppelin’s Hey Hey What Can I Do and The Band’s Music From Big Pink comes into full swing on Too Much On Your Plate, the first take of Happy Old World that features Woolly doing his homage to Shakespeare for an introduction, the full un-edited version of Song For Dying, and the extended director’s cut of Mockingbird that really sets the table for Appetizers, Dinner, and Desert.

If you want to get into Barclay James Harvest’s music, then this is the album to get you started and you’ll see why this band are one of the most under-rated bands to come out of Lancshire to carve out a roaring sound.
Posted by znathanson at 8:46 PM