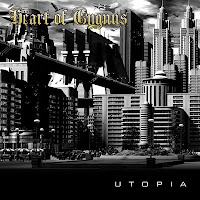 For most Progressive Rock bands, when they released concept albums, the listener would get a real kick out of it, with its background of science fiction or sword and sorcery. For new bands like Heart of Cygnus who’ve released their debut album last year, just goes to show you that they can’t stop the Prog Rock/Metal train chugging. Utopia feels like a breath of fresh air, almost one of those what if moments in Rock Opera history as if Fritz Lang’s Metropolis and Ridley Scott’s Blade Runner would have mated with the video game, Bioshock with heavy guitar and keyboard works. Following in the footsteps of early Queen, Iron Maiden, Pink Floyd, Rush, Metallica, and Dream Theater, Heart of Cygnus’s debut is essential, magnificent and dynamic. And if you have a huge Prog or Metal collection on your iTunes library and on your iPod, this is definitely going to be on your list big time as they come alive like they are the sons of Iron Maiden.
The moment that grabs you by attention is the heavy guitar work, with the sinister militant march introduction of the Prelude that gives us the feeling that War is hell for the main character of Alexander living in the corporate city of hell that is a resemblance of a true epic songwriting that is almost in your face and no turning back in the seas of hell including Lane’s guitar work that is an homage to Brian May to give you the introduction to the album. There’s no debauchery, it’s almost as if Rush is giving the torch to Heart of Cygnus whose techniques of pure Prog Rock with the Moog and the Mellotron so explosive to the music and darker qualities along with the improvisations of drummer Jim Nakihan and guitarist Jeff Lane who bring their arranging and compositions to the max. There’s also the Maiden influence on Metropolis and Elementary (the anti-education number that wants you to give the teacher the middle finger) while the warm acoustical ballads like Alexander’s Lament and Conditioning delivers a moving statement. It’s almost a prequel to Rush’s A Farewell to Kings and Hemispheres – no rip offs right there.
Don’t forget though, they’re getting started. And they have the full control of another concept album and maybe one day go on the road as an opening act for the Canadian trio and you can completely tell the Neil Peart difference. On the website they give their homage to their Metal gods and some Prog heroes such as Megadeth, Rush, Zappa, and Led Zeppelin – but still taking the root of the music to go into another direction. It moves so smooth and classical at the same time with symphonic rock and the NWOBHM taste with three centerpieces including; The Knight, Before the Court, and A Call to Arms. Putting the pieces of the music on the table first is their explosive shipping and those heavy drum and guitar framework.
Some people say that PROG is dead! think again – Prog isn’t dead! This band is fresh and blowing the door completely off the wall that they can’t be dead. And if you enjoy this album, then play it to a maximum volume up to 200 volts and enjoy the ride.
Posted by znathanson at 8:25 PM