Nektar - A Tab In The Ocean 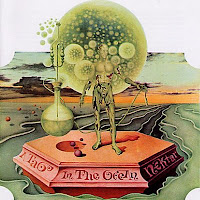 While the Floyd were taking the fans to the Dark Side, one band that deserves to be a part of the Floyd’s music career of their space rock stereotype is Nektar. Their music was quite epic and complex at the same time, but filled with heavy guitar, drums, bass, and keyboards techniques, just gets you filled up. So don’t expect stories based on Lewis Carroll’s Jabberwocky or not a guy dressed up in a sunflower anywhere out of the blue. Formed in 1969, from the ashes of several bands; The Peeps and Rainbows, featuring the space hard rock guitar sounds and roaring vocals of Roye Albrighton, keyboardist Allan Freeman, the fusion sound of the bass guitar Derek “Mo” Moore, and the explosive sound of the drums with Ron Howden along with Mick Brockett doing some heavy duty early laser light shows for Nektar concerts that would definitely please a Planetarium to do a Laser Show of their music.
They never sold their souls to the mainstream scene, but A Tab In The Ocean, their second album from their follow up to their debut album Journey To The Center of the Eye released in 1972 on the Bellaphon label, is one of the best models of their Space Rock sound and improvisations in the distant future.
The album begins with the 16-minute self-titled track which starts out as an ambient oceanic sound from Freeman’s keyboards which almost reminded me of an episode from the Twilight Zone, then it becomes faster while Albrighton’s guitar comes in like an explosion as the band do some heavy arrangements, almost like traveling to the black hole that is almost holding to attract some interests to go inside the Monolith in our solar system that is almost straight out of 2001: A Space Odyssey. Desolation Valley/Waves, a bebop jazz blues of a taste of Robert Fripp meets David Gilmour, as the tempo goes up high with the bass and organ to create some tension while the last two minutes become a spacey time warp in a Moody Blues spoken-word homage that works really well on the finishing touches; Crying In The Dark starts off as a wah-wah guitar solo into the outer limits while the drums come in to set the time signature going and then all of a sudden becomes a hard rock movement and delivering a powerful statement while King Of Twilight in which Iron Maiden covered this track from their Aces High single in 1984, does a damn good job with its military booming sound with the background vocals soaring through the milky way. In the midsection of the piece is a roaring guitar solo which almost sounded like a spell cast upon the listener and helping to find a solution to be free from hell. You get the general idea the music of Nektar, is mind-boggling and almost a concept band who would come up with some great ideas that came out of their spaceships from a Cult band to almost Space hard rock heroes from Mars.
11 albums and a couple of decades later, Nektar’s were too different than the Floyd, but they managed to keep it going with different line-ups and perform at Prog festivals in the States and International places around the world.
Even though the music is strange, and so is the cross between an Anime Rock Opera of Captain Harlock’s adventure of the Planet Rhein, A Tab in the Ocean remains a fan favorite among prog listeners who keep the headphones up to 200.
Posted by znathanson at 8:31 PM