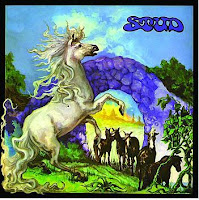 Coming out of the rises of three bands from England; Blossom Toes, Rory Gallagher’s Taste, and Family from the sounds of Blues, Jazz, Proto-Hard Rock, and Psychedelic music, a trio in the later year of 1970 changed the way of the underground scene. Stud had a cross between the roots of heavy prog and jazz-orientated meets folk music which you could definitely see on this magnificent reissue which was part of the Deram label and now finally gets a light of its own on Mark Powell’s Cherry Red Prog Label, Esoteric.
Only 6 tracks on the album with a lot of arranging and compositions, this here is a no holds bar raging and melodic boutique/meaningful album. All of the guitars, bass solos that almost sounded like an earlier take of Weather Report meets Yes in 1969, and wild drums going off the roof as they go off like a raging thunderstorm. For guitarist and lead vocalist Jim Cregan, bassist Richard McCracken, and drummer John Wilson, they were ahead of their time to come up something that was fresh and almost like an explosion that hit the bricks in the wall and crumbling down of this work between the Jimi Hendrix Experience and The Mahavishnu Orchestra’s first two albums. Now imagine that the 12-minute arrangement of 1112235 was almost an avant-garde jazz fusion groove of King Crimson while the country folk fiddlers fiddle on Turn over the Pages, The 7-minute virtuoso orientated proto-metal meets Miles Davis’ In a Silent Way of Harpo’s Head and the 11-minute epic that almost could have been a part of either Tolkien’s Ring trilogy or the Simarillion with another jazz fusion acoustic almost Comus number, Horizon. The most amazing thing about it during the number after the acoustics on Here (Part One), it becomes a free-for-all Hendrix cowbell routine as the band take turns to come up with a chugging sound on There (Part Two).
In the last 4 minutes of the part two, it slows down a bit almost a psychedelic bebop sound then heads back into the rocking roar of Cregan’s voice. The eclectic acoustic ballad of Song is basically a take on an earlier homage to the british folk scene. The centerpiece of their only debut album is the opening track of Blind Faith meets Traffic meets Led Zeppelin on screamers and laughers of Sail On – a piece of the pie that could have been a part of the Heavy Metal 5-CD box set in which people would definitely get their guitars going to hear this mind-boggling rocker in a heavy proportion.
Posted by znathanson at 1:13 PM