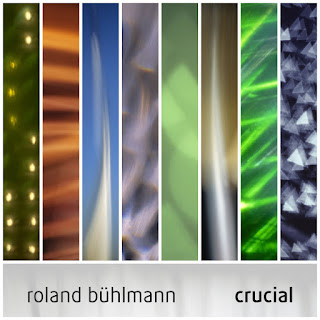 I don’t know how this came to my earphones attention, but this here is a guitarist that has taken the structures of minimal, progressive, and jazz like no other. His name is Roland Buhlmann. When I first heard his music on his bandcamp website, I was quite taken aback. It was like something had landed and taking the temperature levels up a notch by making it, a big challenge for me to tackle.

Roland isn’t just a guitar player, but he’s also a composter and a photographer. According to his biography on his website, he’s been doing photography since the early ‘80s by using Pinhole Cameras. Roland would later start taking these abstract photos in 1992 as he would make arpertures with several holes and different formats. But let’s get straight to his third studio album released this year.

With Crucial, he combines the ingredients of Sonar, Robert Fripp, Markus Reuter, and Gyorgy Ligeti by honoring the master’s work as he steps upwards to the big bright light and seeing what is about to happen next behind closed doors. And with a little help from Mark Wingfield, who has mastered the album, you can imagine that David Lynch himself might need him to score hopefully the next season of Twin Peaks.

Uvkal takes us into the land of the rising sun for the first minute and forty-eight seconds before changing gears into something that has a mysterious vibrant landscape that can be quite unexpected for going into that location while Roland uses his Aeon Sustainer on Higgayon. He creates a surreal effect on his instrument by painting this structure as if he’s honoring three of the masters; Stephan Thelen, Salvador Dali and the early years of Tangerine Dream from their Ohr-era.

Buzzing walks you through this dangerous maze that takes you inside the catacombs with some snarling and eerie consistency’s that feature the sounds of someone being tortured with some clanking effects and fast-sped guitar lines. You begin to find out that this is something that will keep you guessing until the very end with some unexpected plot twists.

Roland travels to the Middle-East with Arabon with another slice of the mysterious locations that are forbidden, but capturing the darker areas in which they’ve become abandoned for centuries as he uses the Aeon Sustainer to create this wandering scenario of what has happened while the title-track sees him honoring the two masters with a different tone, early Black Sabbath and King Crimson.

Crucial is quite a surprise this year that Roland Buhlmann has taken us into those different locations by punching through those doors that have now been opened widely. So for me, this was quite an adventure that I’ve embarked on, and I hope to hear more of Roland’s music by finding out by seeing and hearing from what happen next.

Posted by znathanson at 6:07 PM