King Crimson - The ReconstruKction of Light 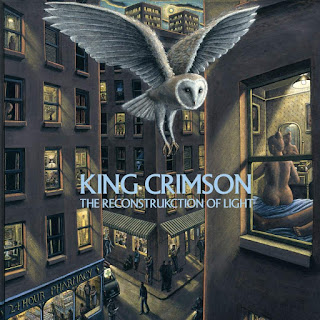 In the year 2000, King Crimson released their 12th studio album on the Virgin label entitled, The ConstruKction of Light, a follow-up to their 11th studio release, THRAK. By this time Bill Bruford and Tony Levin departed from the band. From a double trio to a double duo, Bruford formed a second mark of Earthworks in 1997 while Levin worked Dream Theater members Mike Portnoy and John Pertucci on a project called, Liquid Tension Experiment (LTE) in the same year also.

The quartet during that time frame considered Fripp, Belew, Gunn, and Mastelotto. The album goes into some deep darker territories with nightmarish landscapes. When it was released in May of 2000, Robert wasn’t too happy of the way the album was completed. According to his diary on October 10, 2011 on the Discipline Global Mobile website, Robert believed that “it doesn’t convey the power of music, to a greater extent than any of the King Crimson studio albums.”

Both Robert and King Crimson’s manager David Singleton couldn’t find the original recordings of the album to make another 40th anniversary reissue. So Pat Mastelotto returned to re-record the material on both his electric and acoustic drumkit. Remixed by Don Gunn from the multi-track tapes, except the ProjeKct X track by Pat and Bill Munyon, The ReconstruKction of Light is a return to the forbidden wastelands once more.

And with an incredible artwork by P.J. Crook, it makes you want to go back and revisit this album once more. This was also my first time listening to this album. Around that time in the early to mid 2000’s, I was only focusing on their golden period from 1969 to 1974. But then I began to realize that it was more than just their golden-era, but moving forwards into the ‘80s, ‘90s, and early 2000’s.

But listening to The ReconstruKction of Light, it takes a few listens that might just knock your socks off. The opening track of ProzaKc Blues, sees Adrian Belew delving into the voices of Captain Beefheart, Howlin’ Wolf, and a robotic version of Tom Waits. The World’s My Oyster Soul Kitchen Floor Wax Museum sounds almost like a Monty Python sketch. But you could tell that Robert has a surreal sense of humor in the realms of Dadaism.

You have this militant section from Pat, intensive guitars from Adrian and Robert while Adrian sings through a megaphone about the dystopian ‘50s kitchen frame by honoring the Grand Wazoo. There are some elements of the Post-Rock structures from the ‘80s era as Crimson goes into uncharted waters as Fripp lays on some monstrous growling as if he had unleashed the Beast unexpectedly to reign more terror again before the piano goes into off-key section honoring a hay-wiring effect of George Gershwin’s concerto.

The ConstruKction of Light starts off with Trey’s incredible Warr chomp as he becomes this private detective by capturing the criminal by leaving more difficult clues that he’s left behind for him to solve more unexpected changes between Mastelotto, Belew, and Fripp. The second part is delving into the crunching melodies that crosses barriers of The Mars Volta’s Frances the Mute-era.

Belew sings back and forth in this chanting mode and sings once more for Fripp to climb up and down the ladder to see what Adrian will come up with next. FraKctured sees Robert returning back to the roots of the John Wetton period during the sessions of Starless & Bible Black by continuing by extending the classic, Fracture with a little twist of lemon.

Larks’ Tongues in Aspic Part 4 keeps the engines revved up by increasing the intensity level up to 180 degrees by adding these click-clacking effects with another militant march on the first section. The second segment sees Fripp going into this gigantic tidal wave by delving into the world of the Red period before he closes the gate into the third and final section for the stomp to happen more with extending the nightmarish details that aren’t going to be pretty.

The closing track features one of the pieces by ProjeKct X entitled Heaven & Earth. Now the ProjeKct X recording took place during the sessions of The ConstruKction of Light. Now the ProjeKcts started back in the late ‘90s and as a spin-off to King Crimson right up into 2006. And this was one of the first times I’ve listened to one of the ProjeKcts and I thought it was very interesting to go beyond the structures of going from atmospheric, ambient, and industrial.

The DVD contains the full-length album of ProjeKct X’s Heaven & Earth, including the original mix of The ConstruKction of Light along with a PCM 2.0 New Stereo Mix, and the Surround Mix in 5.1. It also contains a 15-page booklet with liner notes by King Crimson expert Sid Smith, who will be releasing a forthcoming revised edition of his book, In The Court of King Crimson that was originally released in 2002.

It also includes in the booklet, photos of the band both performing and at Studios, concert poster for the German leg during their 2000 European tour, lyrics, and a digital audio tape with track sheets during the recording sessions of the album. Now The ReconstruKction of Light is a return to hear King Crimson of what was from their original release.

Alongside Lizard that Robert Fripp has reconciled over thanks to the incredible mix by Steven Wilson ten years ago, Don Gunn’s mix of The ConstruKction of Light is quite good and I think Robert has finally given a change of heart on a new light of King Crimson’s 12th studio album.