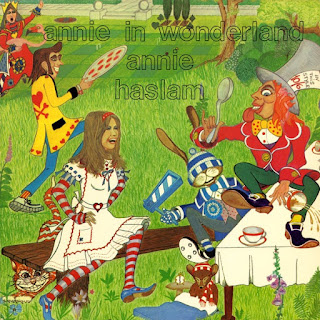 In 1977 at the time Punk and Disco were ruling the waves by bashing both the Progressive and Hard Rock genre with a mighty fist, Annie Haslam of Renaissance released her first solo album that same year entitled Annie in Wonderland. By this time period keyboardist John Tout was ill. So it gave Renaissance a chance to take a break from that 3 month gap by giving Annie recording her debut solo release with a little help from Roy Wood of The Move and Wizzard.

Recorded at De Lane Music Centre in Wembley, Annie in Wonderland sees Annie not just showing her roots in the classical genre, but carrying the essence of Pop, Surf, Flamenco, Tribal, and a nod to Frank Capra’s It’s a Wonderful Life. It isn’t just progressive, but with a little twist of lemon inside the red velvet cake. Both Hunioco and Nature Boy are Annie’s tip of the hat to the great masters of pop, ABBA.

She takes the listener through the hottest weathers across the Atlantic ocean while she sings the melodic lines that Roy’s electric sitar gives her some warmth to see the sun move to the west and going back into the dance halls. Roy’s sitar and percussion work on those two tracks come up with unexpected twists.

What Annie would do is give Roy free rein on the fourth track by setting up this African tribe on the percussion with an unexpected twist. The last minute and 51 seconds on the song, they go into this chant to free the gods once more for a call-and-response mode as Roy tips his hat to Ladysmith Black Mambazo. Listening to Annie’s take of Rodgers & Hammerstein’s If I Loved You from the 1945 musical Carousel, it sounds like a flamenco lullaby that brings similarities to the golden-era of Disney between the 1940s and into re-awakening from the mid ‘80s to the early ‘90s.

I Never Believed in Love features some acoustic-beatlesque voyages with some saxophone sections featuring sliding guitars, and Jon’s bass lines to give the lushful beauty to enjoy the driving throughout the countryside as Rockalise is a song dedicated the Nightbird herself, Alison Steele. She was the top Radio DJ in New York’s WNEW-FM station.

You may have heard her voice on the 2-CD set of Nektar’s live performance in New York in 1974. She was also a friend of Renaissance. For this instrumental piece, it a different variety of sorts. There are moments that go from classical, ‘50s rock, to surf music of The Beach Boys. It shows that how much Roy’s arrangements were way ahead of its time.

Going Home which was inspired by a 1973 TV ad for Hovis Bread and directed by Ridley Scott, this gives a chance to close the curtains for Annie to sing this beautiful song with the choir by giving it a suitable chance to make it a composition for the Christmas carolers to sing in December each year. And it is a wonderful finale that Annie could have written for Frank Capra’s 1946 classic, It’s a Wonderful Life.

The album was released both in the UK on the Warner Bros label and on the Sire label in the States. It reached no. 167 on the Billboard’s pop albums charts. With an amazing reissue by Esoteric Recordings, it is released as a digipack featuring the original artwork by Roy Wood himself.

It contains a 16-page booklet with liner notes by Malcolm Dome about the making of the album with an interview by Annie Haslam. It includes photos of the band members, Roy, Annie’s parents, and the gatefold of her wearing this beautiful white dress looking at the sky. Now this was a very interesting experience for me to listen to Annie in Wonderland.

Some like it, some don’t. But when I heard Esoteric were going to reissue this back in late September, I decided to check it out. And it’s not bad. It’s different, but pretty good. And I hope they continue with more of the Renaissance catalog for 2020. I’m crossing my fingers for Scheherazade and Other Stories, Azure D’or, and Turn of the Cards.

Posted by znathanson at 8:11 AM