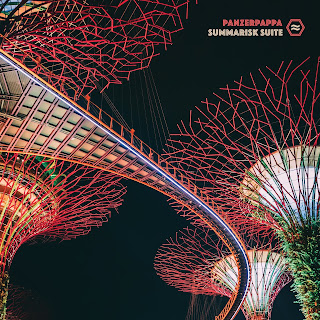 Despite the line-up changes, Panzerpappa are still going strong by keeping the fires of the RIO/Avant-Rock genre burning bright. After discovering their music thanks to both Sid Smith’sPodcasts from the Yellow Room, they’ve released six studio albums from 2000 to 2016. So the big question is this, what will Panzerpappa think of next? Well, it’s been three years since they made a new album. And this year, they’ve released a new album from the Apollon Records label

Home to bands such as Ring Van Mobius, Pogo Pops, The Windmill, Pixie Ninja, and Swifan Eohl and The Mudra Choir, Panzerpappa fit right at home to Apollon. And their follow-up to 2016’s Pestrottedans, their seventh album Summarisk Suite (Summary Suite) shows that they have cooked more hot and spicy foods that are very delicious by mixing in both Tabasco and Wasabi sauce that makes it very yummy and very dangerous.

From the opening track of Alerisk Symfo, the eerie introduction of the keyboards sets up this cold wintery night with Jarle’s howling cry that is a nod to Terje Rypdal. And some nods to Pink Floyd’s Obscured By Clouds meets the saxophone from Blade Runner done by Steinar himself.

You have this intensive atmosphere that gives Panzerpappa does by going into some militant formats as they do a quick change reminiscing Present’s Roger Trigaux and delving into the madness that his happening across the city before the mood changes into the style of George Gershwin’s Rhapsody in Blue done in a Rock in Opposition format.

Listening to Belgerisk Improv, Panzerpappa honors the scores of the ‘50s B-Movies as if they were using the Theremin by bringing Gort from the 1951 classic, The Day the Earth Stood Still, back to their home planet once more. Now I can’t tell if Steinar is playing either his Saxophone or the Akai EWI 5000, but it works well by creating this sombering mood of a planet that once was bright and beautiful, has now descended into chaos.

Jarle channels his inner self of Allan Holdsworth as Anders walks through a deep, dark passageway while the sound increases to bring this epic scenario for the Oms and Draags to bring peace between each other from Rene Laoux’s 1973 adult-animated French classic, La Planete Sauvage (Fantastic Planet). Revidert Malist is a nod to Terry Riley, Philip Glass, and Steve Reich while Seriell Ballade makes the jump to light speed.

With a haunting melody between the guitars, piano and sax, it sets up this notion of walking through this empty giant cavern they come across by walking into the territories of Art Zoyd’s Musique por l’Odyssee with some watery effects and insane noises as each of the doors open up one by one by making everything go haywire. And then they hurtle through the cosmic forces with some Canterbury twists and turns.

I have to say this Panzerpappa’s Summarisk Suite is an okay album. Is it their finest? No, but they brought some great ideas that show how much they’ve been around for 22 years. And while this album has some great moments, it shows that they are still going strong and never giving up.