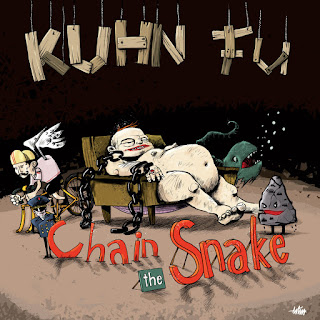 It’s been two years since Kuhn Fu have released a new album after the release of their 2017 album, Kuhnspiracy. So for me, I had completely forgotten about them. Until this year. Their follow-up Chain the Snake, shows them that the band are going strong. And this time it is filled with vengeance. Christian, Ziv, Esat, and George have the battering rams ready to burst the doors down with a hardcore punch.

Marco Messy Millionaire starts off with a brassy punk attitude as Christian channels both the Diablo Swing Orchestra and the Mystic Knights of the Oingo Boingo by singing in the styles of Danny Elfman. It delves into some of the territories of Captain Beefheart as Christian and Ziv do this intensive challenge between each other as they raise the stake to see where both rhythm and improvisation go into some free-Jazz punk like structures that honor the WorldService Project.

Gargamel sees Kuhn Fu delve into the gems of Frank Zappa’s Weasles Ripped My Flesh. You could tell that Kuhn is like a composer by giving Ziv, George, and Esat some ideas on where he wants the band to march right into before going into this late ‘60s mysterious atmosphere with some wah-wah grooves. Traktus is one of their darker compositions by delving into the waters of the Rock In Opposition movement.

They channel parts of Henry Cow, Present, and Univers Zero before Christian Kuhn screams in the styles of Magma’s Christian Vander for a couple of seconds as Ziv’s clarinet and the dooming string bass sets up this nightmarish bloodbath as it switches into more of the punky movements as if Kuhn Fu are giving Green Day the big giant middle finger!

Gustav Grinch is a ska mode meets avant-jazz approach as Kuhn and Ziv crawl into this tiny little mouse hole by doing some alternate cartoon scores honoring Ren and Stimpy and the Robert Clampett-era of Looney Tunes. You can imagine Kuhn Fu are tearing down the rule books by going into the sounds by creating their take of making music for the 1942 short, Bugs Bunny Gets the Boid as if Beaky Buzzard has finally achieved his goal by capturing Bugs as if to please his mother.

Listening to Wolf’s Muckenkagel, Hadow’s tidal-wave intro on his drumkit is going through the sounds of The Ventures and The Surfaris. The chanting vocalziations go into a middle-eastern Malaguena motif as the chords makes these crashing sounds by setting up the final sequence of Clint Eastwood’s character of The Man with No Name in the final part of the trilogy, The Good, The Bad, & The Ugly.

Kuhn Fu have scored another touchdown in their own take of Football with Chain the Snake as if they brought everything from the kitchen table of Jazz, Swing, Ska, Punk, and the Rock In Opposition genre into a delicious Wasabi Mango Pineapple Smoothie. And Christian himself has delivered more than just a smoothie, but a volcanic eruption that is ready to explode.
Posted by znathanson at 10:36 AM