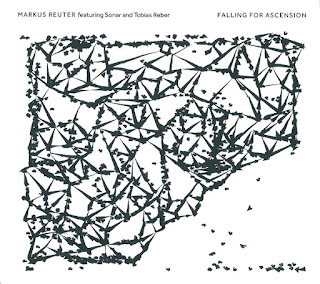 Markus Reuter has made a name for himself as a musician, composer, producer, and an instrument designer. From his collaborations with Stick Men, The Crimson ProjeKCt, and producing bands/artists such as Gentle Knife, Yang, and Sonar’s Stephan Thelen, Reuter has been around for nearly 23 years. And there is not a stop sign for him, because he is still going strong and never giving up.

Two years ago, he released an album by teaming up with Sonar and live electronic Tobias Reber called, Falling For Ascension. Released via Ronin Rhythm Records, Nik Bartsch’s label, Falling For Ascension gives Reuter, Reber, and Sonar a chance to dive into the waters of some unbelievable nightmares. Markus wrote some of the early compositions between 1985 and 1987 when he was in his teens.

To bring both Sonar and Reber by lending Reuter a helping hand, this is an interesting combination, but it works. The album was recorded in one day similar to what John Coltrane had done with his 1965 classic, A Love Supreme in one session. Reuter wanted to have it done under his direction as the pieces were prepared as modules with the 12-tone system as he assigned the instructions to each member.

Frank Zappa once said, “Music in performance, is a type of sculpture. The air in the performance is sculpted into something.” And that is what Falling For Ascension is, the sculpture of Reuter’s compositions being done from start to finish with some insane results.

Condition I is following in the veins of the ‘80s-era of King Crimson by keeping the fires burning. Markus and Sonar walk into this dangerous tightrope that goes from the Grand Canyon to the edges of the unknown. You can feel the levels go up a notch as Christian’s bass line and I believe it could be the electronics done by Tobias Reber. It goes into this bass and dark-like piano tones to set up the traps in its right place.

Condition II sounds like a Space Jazz Rock voyage that crosses over the Moonmadness-era of Camel, Herbie Hancock, Hawkwind, and Gong’s The Isle of Everywhere with it’s rhythmic melody. Throughout the loops and some of the Jonny Greenwood territories, it sends you towards a Clockwork Orange-like scenario with some insanity that is ready to unlock the prison doors so that the inmates can run the asylum.

The larger sections of the forests get even darker on Condition IV. As it gets bigger and bigger by the second both Markus and Sonar walk into, the piece is even more dangerous as Reber’s spooky atmosphere shows that the killer is on the loose by raising the heat gage level to 500 degrees. The closing track that clocks in at 22 minutes is Unconditional.

Listening to this train chugging riff that is on a loop, I can imagine that Markus is tipping his hat to Lainey Schooltree and her 2017 Rock Opera, Heterotopia as if they’re plaing the style of the final section, Utopia with a Crimson twist. But it goes into the Starless & Bible Black-era as Reuter knows exactly where he wants them to go into this final light at the end of the tunnel.

The music itself becomes brighter and brighter by thesecond as if to get out of those muddy tunnels. They know that once they reach the final mark, you could tell that this was one of the challenging structures of music that has have been a part of. And they deserve a gigantic pat on the back.

Now while this album itself didn’t grab me that much, it took me about a year or so to appreciate this album as if ears would accept Falling For Ascension or not. And for my ears accepted it. Now mind you, this album is not your typical prog-rock album, but Reuter, Reber, and Sonar finally release some magic underneath their sleeves and they nailed it.
Posted by znathanson at 10:56 AM