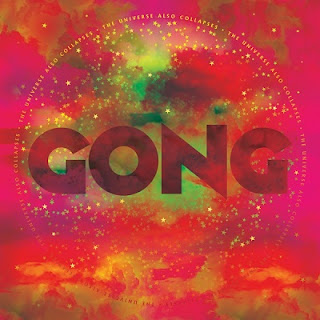 “Flicking through the pages/I’ve forgotten every word/The lines are meaningless/The photographs are blurred/And when I close the book/The story opens again.” The opening lines from the closing track of The Elemental shows that Gong are going strong since the passing of its co-founders, Daevid Allen and Gilli Smyth. But keeping their spirit and legacy alive with their follow-up, The Universe Also Collapses.

I don’t know how long it’s been since I’ve listened to Gong’s music. Maybe four years or so that I haven’t gotten back on board with their Flying Teapot. But it’s time to head on board again with their fifteenth studio album released on the Kscope label. Their follow-up to Rejoice! I’m Dead! Is quite an achievement as Kavus continues to keep both Daevid and Gilli’s spirit alive as a new commander and the new captain of the Flying Teapot.

“I think we’ve all been affected enough by Gong for it to be in our DNA and for it to be a way of operating that, we’re doing new music in that framework.” And that is what the next generation of Gong are doing, is bringing a new form of sound in the structure of Gong’s music and where would the flying teapot would take them on their new adventures that awaits them for Kavus, Dave, Cheb, Fabio, and Ian.

Clocking in at 20 minutes and 30 seconds, Forever Reoccurring starts off with some early Tangerine Dream before Strut’s synthesizer’s sets up the controls up and running before the sliding guitars go up and down and go beyond the outer limits of space and time. Kavus is like the master of ceremonies by telling the listener on what is about to happen in the years to come before the planets collapse in front of our eyes.

Not only that, but it gives Ian East’s saxophone through some passages and Torabi creating some challenging lines throughout his guitar before heading back down on dry land and going into the Carnivals of the unknown. Torabi’s riffs on If Never I’m and Ever You, sets up these spacey punk sections as East goes in for the kill on his instrument with a stop-and-go moment before going into the next parallel universe.

My Sawtooth Wake follows you back into the Isle of Everywhere with some crunchy riffs that have these little structures of Raymond Scott’s Powerhouse before Kavus becomes this faceless figure of what has happened in the storyline featuring some creepy vocalizations as Torabi channels the visions of both Daevid Allen and the late great Robert Calvert from Hawkwind. As Gong sets up this intensive moment in the 7-minute mark. Now this took me about three listens to whether or not I liked The Universe Also Collapses.

And I had absolutely no idea of what my eardrums were going to say. Well, my eardrums welcomed Gong's new album this year. As I’ve mentioned earlier, Kavus is making sure that the spirits of Daevid and Gilli’s legacy is alive and well. Yes, there will be some dividing line in the sand whether to accept the new generation of Gong or not, but what they have done, is to honor and staying true to that legacy. And The Universe Also Collapses, is the next adventure for the new cadets on board the Flying Teapot. Okay everybody, repeat the following chant, “I Am, You Are, We Are, Crazy!” Now we’re ready!

Posted by znathanson at 7:57 AM