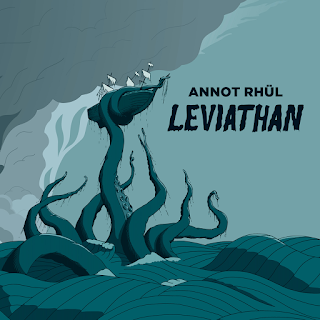 The soundtrack and movie inside your head can be an excellent combination as you close your eyes whilst imagining the score setting of a dark and cavernous adventure into another world and another universe. And the music of Norway’s Annot Rhül is the perfect dosage to really take the essence of Progressive, Psychedelic, and Space Rock into one. Annot Rhül isn’t a band, it’s a pseudonym name for composer and instrumentalist Sigurd Luhr Tonna.

He plays a little bit of Bass, Guitar, and Keyboards. Sigurd also writes the music on his Laptop and the demos also to come up with brainstorming ideas to lend a helping hand on his first two albums and two EP’s to create a conceptual momentum on where he would want the listener to embark on a journey that is surreal and beyond the beyond. His third album released last year on the Black Widow Records label called, Leviathan, is the album that could have been recorded back in 1973 and would have given a huge stamp of approval in the realms of Pink Floyd.

At times the music alongside the atmosphere of the Floyd, resembles touches between Hawkwind, Pulsar, and Tangerine Dream. And it’s a perfect blend for Sigurd to combine those ingredients. He also brought along some members from Wobbler, Seid, Asagio, Love Revolt, and Manifest. They are giving Tonna a helping hand by showing support and seeing where he wants to take and go a fantastic voyage into those worlds that will sends shivers and goosebumps down your spine and make the hair go up at any moment.

The album begins with the 12-minute suite of the title track. With an ominous synth/guitar introduction that almost sounds like it was recorded in a dark cavernous place featuring the Piano going through a Leslie speaker. And then the guitars go into a spacey riff followed by a haunting melodic Floyd-sque rhythm between rhythm and lead with a psych ascending twist followed by the vocals.

The title-track is a conceptual narrative about an alien lifeform reigning terror towards the sailors for an unexpected attack. And then, the midsection goes into an ambient-atmosphere whilst the tension builds up as the monster is ready for an attack with Guitars, Mellotron, and Drums galore before going back into the relaxing groove on the last two minutes. The next two pieces are inspired by HP Lovecraft’s short stories.

The sonic-adventures resemblance of Hawkwind gives it a real jolt before ascending into a relaxing waltz on The Colour out of Space while going into the spooky climbing momentum of the visions of things to come in a person’s insanity of the creatures coming to their planet are shivering and sending shivers down my spine as if the doctor is to the man on what he is seeing at The Mountains of Madness.

Distant Star features a thumping drum rhythm intro followed by a ‘60s bass line, Mellotron, outer limit synths with a clapping sound into almost what makes it one of the scores for one of the European spy-science fiction flicks, gives it a perfect jolt. And you can imagine Ennio Morricone being very proud of Tonna for capturing the essence of the scores from the time period.

Then incomes the epic, R’Lyeh. In which it’s a five-part suite and Tonna knows his touch of H.P. Lovecraft very well! In the finale of the piece in which it closes the album, it’s energetic, riveting, and eruptive thanks to the heavy guitar parts and the melodic Mellotron’s that is on here. There’s a softer side also in the midsection with the Floyd twist thrown in before going into high gear of a Crimson-Hawkwind adventure into Space and time.


I have listened to Leviathan around four times and I have to say I’m very impressed from what I’ve heard from right into the beginning and into the end. And you have to give Sigurd Lohr Tonna and some of the members that helped out on the album, a huge amount of credit for this mind-blowing album. It’s an adventure you will never, ever forget. So if you love the essence of Pink Floyd, King Crimson, and Hawkwind, then enjoy Annot Rhül’s Leviathan.
Posted by znathanson at 7:11 PM