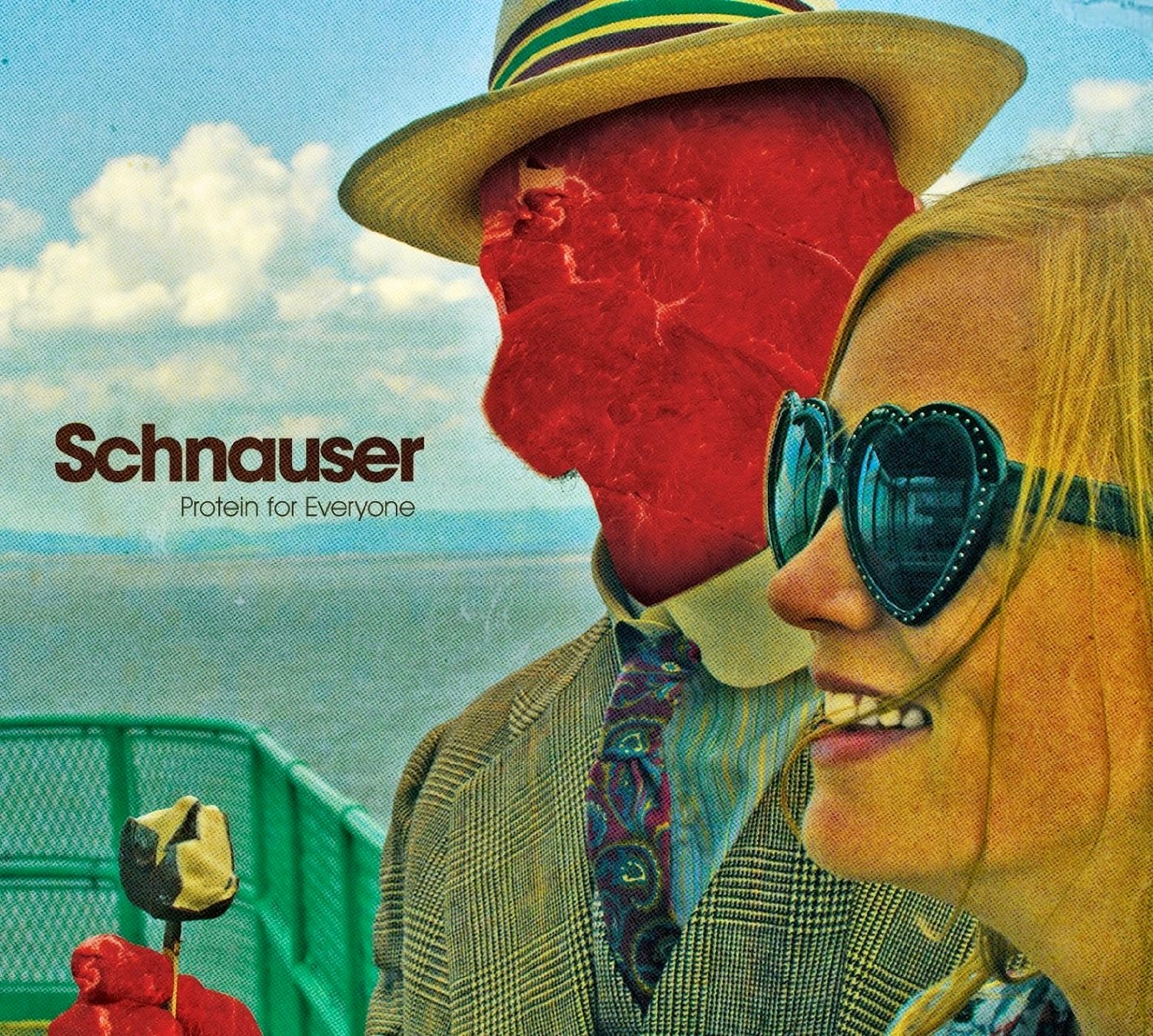 Esoteric Antenna have always released some amazing new bands and artists that are part of the label including; Matt Stevens, The Reasoning, Panic Room, Sanguine Hum, Hi Fiction Science, and now part of the Esoteric Antenna family is a group that have been around since forming nine years ago in Bristol called Schnauser. The band have this wonderful combination of Canterbury Prog, Psychedelic Pop, and ‘60s touches of the Baroque sounds of the Beach Boys thrown in.

The band released four albums and two EPs that were self-released and on labels including; Pink Hedgehog, Bitter Buttons, and Fruits De Mer. This year, they’ve released their fifth album called, Protein for Everyone. It shows the bands sense of humor and whimsical touches thrown in and they have done a spectacular job with this. The band considers; Alan Strawbridge on Guitar/Vocals, Duncan Gammon on Keyboards/Vocals, Holly McIntosh on Bass/Vocals, and Jasper Williams on Drums.

Opener, Grey or Blue begins with a fuzz tone bass riff, drums, guitar, and keyboards go into a joyful mood and having the sound of a VOX organ go into the uplifting melody, is very powerful as Schnauser is having a blast and good time getting in a good mood before going into a laid-back Beatlesque touch as it goes into the soaring signature. But Duncan goes into his improvisation on the organ with the fuzz sound resembling the tribute to Mike Ratledge and into the sound of the Soft Machine. And it is a great way to start the album off.

The waltz ¾ time signature of the dystopian title track, has a carousel/merry-go-round touch, has the Baroque Pop and Syd Barrett elements thrown in with the exchange between the members. It almost reminded me as if Schnauser had written this in the ‘70s for the science-fiction film, Soylent Green as the lyrics deal with selling protein for the plot twist in the lyrics that will take you by surprise that they are dealing with issues on what’s going on in the world today.

National Grid is very much of a spacey psych adventure in the world on social media and not to mention the touches of Caravan’s David Sinclair in the psychedelic touches while The Reason They’re Here, gives Alan a chance for Holly to take over on lead vocals as it goes through the sounds of mellow sound of The Doors as they sing on the creatures of the wasp. Split is a gentle and touching ballad that Alan sings with the lyrics on dealing with what to do after a relationship goes wrong as Buon Natale in which it means “Merry Christmas” in Italian, is romantic with a touch of Country Folk turned mellow grooves and adding a touch of background vocal harmonies of 10cc with elements of the sound from the Richard Thompson-sque guitar techniques to go with the flavor.

Then we go to the 17-minute epic finale of Disposable Outcomes. It begins with Alan doing a tribute to the late great Vivian Stanshall of Bonzo Dog Band with a radio-like introduction on what we as the listener are about to hear. Schnauser then goes into the Canterbury improvisation of the early ‘70s that is a real treat with psych and jazz fusion influences that is out of this unexpected ideas and let me say they really know their inspirations and roots very well.

You could hear Hatfield and the North, Egg, and The Soft Machine thrown into the mix and it is a wonderful adventure of the bass lines, mellotron, electric piano, horn sections, and acoustic guitars that goes from frenzies into a soothing prog-pop soaring beat and an adventure before Alan’s Stanshall comes in for some humorous dialogue before the last 2-minutes is an ascending ride back home for them to give it a powerful Canterbury closing.


Mark and Vicky Powell have scored a home run for signing an amazing band that show they Schnauser carry the touches of the genres. And for me, I have listened to Protein for Everyone about seven times now and I’m hooked into the music of Schnauser and I can’t wait to see what they would come up with next. So if you love Progressive-Psychedelic Pop along with the Canterbury influences as well, then Schnauser’s Protein for Everyone is right up in your alley.
Posted by znathanson at 10:28 AM