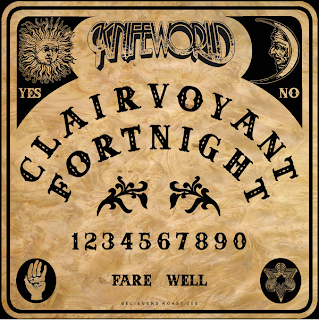 The creative genius and the mastermind behind Knifeworld and part of the Cardiacs, Kavus Torabi has been a busy man lately after the band’s mind-blowing debut back in 2009, Buried Alone: Tales of Crushing Defeat, shows that while they are working on a follow up to their first album, the group can bring the sounds of Prog, Pop and the Avant-Garde genre up to a whole new level this year with the release of their third EP this year, Clairvoyant Fortnight on the Believer’s Roast label.

Now if you have a combination of Frank Zappa, King Crimson, and the Rock in Opposition sounds of the late ‘70s, proves to show that this band are going to hit the big time one day to be following in the footsteps of Zappa himself with a touch of the Avant-Prog Pop flavor sounds they have in their sleeves. And never forget, having a dark sense of humor in their music as well to get the flow and vibe going in their musical atmosphere.

Now with the opening title track, which you can see a music video of the composition on YouTube and be on the look-out for a cameo of snooker legend, Steve “Interesting” Davis at the very end, who hosts his own radio show, The Interesting Alternative Show on Phoenix FM in the UK which plays Canterbury and RIO Prog material music to fill your ears. But let’s get to the track which features Kavus and Melanie taking turns with vocals on the time-changing psychedelic quirky pop number which has eerie organ sounds, rhythm clapping sections, and very sing-along like if you will to take you into the Outer Limits.

There are some fantastic moments from the opening number that bits of it reminded me of The Move’s I Can Hear The Grass Grow while In a Foreign Way has some melodic uplifting moments featuring touches of guitar, sax, and flute, combining together in a glorious sound to make you get ready for the last track that clocks in for 7-minutes. The Prime of our Decline, has some heavy brass, hard and time signature rock elements to it with a militant dramatic musical element on the guitar and drums with a mini operatic format that will take you for a wonderful joy ride for the sun to come up.

Humor, Fun, Quirky, and an enjoyable EP to listen to, Knifeworld have got a long road ahead of them and since they are flaming with fire into the night, they will make it big into the Prog world like no other.
Posted by znathanson at 11:41 PM