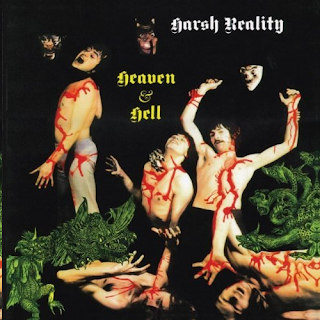 Now while the cover has a combination of; gothic, horror, and a bit controversial, you began to wonder where their influences have shown in the stories of HP Lovecraft and Edgar Allen Poe. And the only surprise that this is actually a five piece band called Harsh Reality that was formed in Hertfordshire back in 1968 and it is really them on the cover drenched in blood being tortured by demon like creatures that is almost like something out of a Mario Bava’s 1960 Italian cult classic, Black Sunday.

The band released their only debut album, Heaven & Hell, originally released on the Philips label back in 1969 and reissued in 2011 by the good people at Esoteric Recordings who have done a wonderful job restoring the album and given the album the recognition not only in the Prog community, but for collector’s to search for the original LP that is hard to find and out of print. The sound of Harsh Reality’s music is a combination of Traffic, Family, Procol Harum, and a touch of Graham Bond thanks to the organ driven sounds of Alan Greed, whose voice has a combination of Steve Winwood and Roger Chapman.

However, there’s a bit of; Acid Folk, ‘60s Soul sounds of Stax, Prog-Psych, and Experimental Avant-Garde noises as well to go along with it. So imagine if it was the end of the ‘60s and you were to play this album from beginning, middle, and end, you wish that they could have been the next Traffic, but disbanded the same year when the album was released. If the band hadn’t broken up, they would have created some great albums and influenced a lot of musicians to understand why they were ahead of their time.

Listening to Heaven & Hell in its entirety, it’s not the greatest album that they made, but it’s one of the most lost classic albums that have been found in deep hidden treasures in a secret island that has some listener’s to take point and make notes to why they never followed in the big names of the Prog and Psych scenery. You have the Soulful ballad touches of Tobacco Ash Sunday which Paul Weller of the Jam covered for his AOL sessions, has a mellowing groove while the Soul-Blues shuffling opener When I Move could have hit the Mod dance floor in a manner of seconds.

Then you have a song like sound resembling The Who and The Yardbirds on Devil’s Daughter which according to the liner notes deals with someone being hanged as the 3-part musique concrete noises of Folk and the early beginnings of Krautrock come into fit place of Mary Roberta. And Girl of my Dreams which has a bit of a middle-eastern psych-pop opera feel, shows that Harsh Reality could write an uplifting yet soaring composition to make it a sensation of a hit single.

The original vinyl version of the album on the Philips label which was on eBay years ago, selling over about £400 ($626), makes it a special treat to buy it and treasure it in their record collection. A must listen to album that has finally saw light at the end of the tunnel.
Posted by znathanson at 1:04 AM