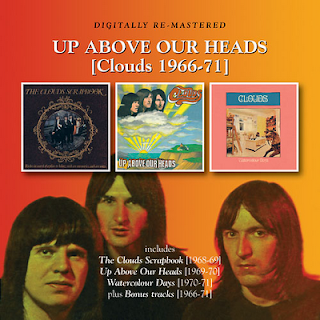 It’s been quite interesting for a band as a three-piece, whether it’s Keyboards, Bass, Drums, or Guitar to name a few to create sounds of Jazz, Prog, and Hard Rock to name a few. When people think of a trio, they think of; Triumvirat, ELP, Rush, Le Orme, the Jimi Hendrix Experience, Cream, and Grand Funk Railroad for their first five albums. But, there is one band that deserves a lot of recognition to be a part of the Three-Piece.

Clouds were an obscure prog-psych trio that have influenced the sounds of Pop, Jazz, Classical, and Rock combined like an orchestral soundtrack to Little Nemo’s adventures. They didn’t have different line-ups like Yes did in the ‘70s, ‘80s, ‘90s, ‘00s, and didn’t do any one of the pomp and circumstances that ELP were doing in their later days as well, but with Clouds, wanted to have a good time and come up with soothing and good old enjoyment with the Drums, Organ, and Bass.

Formed out of the ashes of 1-2-3 in 1967, the band featured Billy Ritchie on Keyboards, Ian Ellis on Bass Guitar, and Harry Hughes on drums. Billy’s organ-driven sound had inspired people including Keith Emerson and Rick Wakeman who would come to the Marquee and were blown away of his performance including a young David Bowie who called Clouds in 1967, “three thistle and haggis-voiced bairns had the audacity to face a mob of self-opinionated hippies with a brand of unique pop music which because of its intolerance of mediocrity, floated, as would a Hogarth cartoon in Beano.”

The trio were later signed to Chrysalis Records and received word-of-mouth while performing at the Aragon Ballroom, Royal Albert Hall and the Fillmore East in the late ‘60s, but their three albums released on a 2-CD set called, Up Above Our Heads [Clouds 1966-71], released on the Beat Goes On label, shows how obscure and under-rated this band really were. If they had been around today, they would have given ELP and Genesis, a huge run of their own money and been blown away from what they have heard.

The Clouds Scrapbook, released in 1969, is the band’s first album of its symphonic humor jazz tinged pop flavored album. There’s a lot of that sound and sometimes a bit of the time changing rhythm between the three men with a boost in their material like rocket-driven The Carpenter, the touching balladry of I’ll Go Girl and Ladies and Gentlemen while they go into a bit of the Carousel Ragtime music with Grandad and a tribute to the workers and the industrial relationships they were in during the socialist movement on the militant British anthem, Union Jack. Elsewhere to go into a jazzy street thanks to the sound of Bluesy Soul on Ian’s walking bass line on Old Man as they take their dramatic pastoral strings to a level on Waiter, There’s Something In my Soup.

It was a good start and could have made Clouds something extraordinary. Up Above Our Heads, their second album on the Deram label in 1970, sees them paying tribute to the Jazz scene in the ‘40s and ‘50s that proves to be a fun groove for them to go into. Their take of Louis Prima’s Sing, Sing, Sing, which is 13-minutes long, is a must listen to track done by Ian’s bass work and Harry’s drumming as they duke it out going through signatures throughout the entire piece as Billy comes in to do organ related sounds of Fats Waller in his homage to the Jitterbug Waltz in a freak-out style!

The boogie-woogie sounds of Waller’s organ which I could tell that Billy was heavily inspired of his work could be found on the powder keg brass-rockin tune of Take Me To Your Leader while Big Noise From Winnetka is the centerpiece on the track. In the piece, Ian does this fusion-like bass line as he and Harry play like a team as he uses the sticks to play the strings while going back and forth on percussion and bass. It just goes to show you how Clouds were way ahead of their time and deserve a lot of recognition.

Third and final album, Watercolour Days, released in 1971 was their farewell as Chrysalis was moving into another direction with up-and-coming band, Jethro Tull to become the next big thing. The symphonic structures were in there, and the dramatic chord structures were in there from their first album, but they knew if they were going to call it a day, this would be it.

However, there are some wonderful tracks like the uplifting title track and Leavin’, the proto-metallic piece Get Off My Farm, and the harpsichord classical beauty of I Am the Melody that resembles sessions from The Mason Williams Phonograph Record. The bonus tracks which feature their singles in the late ‘60s including a rare live performance of 1-2-3 at the Marquee performing a beautiful take of Simon and Garfunkel’s America, it is a must listen to 2-CD set to go into the history of Clouds music.
Posted by znathanson at 6:13 PM

It's a paean to the proud Socialist tradition of Union men.

Thank you for letting me know. I'll go ahead and change it.

Nice review; it's only just dawning on critics how important an influence this band was.

Nice review. It's only just dawning on critics how important an influence this band had on all that followed.