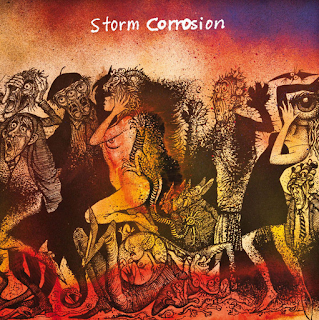 When it was announced that Steven Wilson and Mikael Akerfeldt were going to work together on collaboration back in 2010, it seemed like it made perfect sense. Coming from two bands in the realms of Porcupine Tree and Opeth in the Prog world working on something that was special, beautiful, disturbing, and yet breathtaking at times as if they were childhood friends they hadn’t seen each other for about 20 years and now reunited to work on something that was out of a gothic fairy tale in the realms of Storm Corrosion.

It’s one of the most twisted, strange, avant-garde, and yet compelling albums to come out this year along with a cover that would have make your jaws drop in awe for what they have done. Meaning, what they have given us, is a soundtrack that could have been done for the horror genre and knowing that they could have written this as a score for the 2004 film, The Exorcism of Emily Rose and give it a bone-chilling soundtrack that would have made Dario Argento very happy for.

From the beginning, middle, and end, Storm Corrosion’s sole self-titled debut album, works with complete perfection and influences coming right at you. Opener Drag Ropes kicks the album off with something gone wrong of making you realize that you are inside the mind of a crazy person locked up in an insane asylum. With its lushful string quartet going into a dark and territorial place and Mikael’s voice sending chills down your spine, adds the tension and realizing there is no way out of the house. Not to mention the homage to Queen’s The Prophet’s Song mid-section vocal arrangement in which is out of this world.

Then we come to the 10-minute title track, starts with this lukewarm acoustic fingerpicking crisp beauty that has melodic structures and touching lyrical boundaries and then it becomes a massive haywire new age sound between the strings and the guitar as they go into this shrieking nightmarish screaming sound becoming the sound of death as it goes back into the calm after the storm from Mr. Wilson’s vocals to let the listener know that everything’s okay.

Evil is everything that makes it a sinister and powerful word and the piece Hag is one of them. Featuring guitar, electric piano, and the mellotron, goes into a deeper dark cavernous cave as they pay tribute to Graham Bond’s Love is the Law as a little help from Gavin Harrison comes kicking the door down with a powerful drum work as he’s letting Steven know that even though Porcupine Tree is taking a long vacation, he still got his back and adding a touch of the groceries from the early Crimson in the 1970 period.

As Happy feels like a calm-like spooky acid folk finale, the listener thinks that album is over and done with, well they were wrong. Lock Howl goes into the first two minutes as a ‘70s rock format and then it goes into soaring mellotron boogie featuring a clapping rhythm section as it switches seats into an Avant-Garde territorial momentum that takes the person into a different section of musical sections to see where the note in the seat is going to land on.

Then we come to closer, Ljudet Innan as Mikael pays tribute to Thom Yorke that just took me by surprise in a way he sings along with the Rhodes as it goes into an atmospheric music sound from the mellotron going into a new dream of beauty and wonder that goes into the sound of early Pink Floyd and brings up this bluesy guitar work and vocals from Steven Wilson comes in to close the piece up.

After you have listened to album, you have just embarked on a dark and haunting journey. I have listened to this about five times and I’m still surprised and blown away on how Storm Corrosion has done it. Even though it will have mixed opinions from the Prog community, but what Wilson and Akerfeldt have brought to the table is like finding a lost diamond in the Egyptian sand.
Posted by znathanson at 12:34 AM