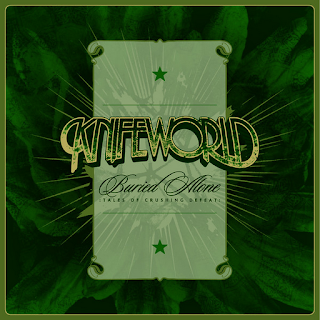 Kavus Torabi, who looks like a mad scientist who created Frankenstein, has a strong influential background in the Rock in Opposition and the Prog sound in the realms of: Henry Cow, Gong, Gentle Giant, Magma, White Noise and the Canterbury trio, Egg. That and his new band Knifeworld, which launched back ten years ago a solo project and now as a band, shows not just his obsession with the prog sound, but pushing the envelope with a mighty battering ram that would send a twisted wave like no other.

Now if King Crimson had teamed up with a band and taken them on the road back in the 1980s during the Three of a Perfect Pair tour and headlining them would be the Cardiacs, it would have been a perfect match made in twisted paradise. And Knifeworld’s debut album Buried Alone – Tales of Crushing Defeat released on the Believer’s Roast back in 2009, is one hell of a debut that they have released not just on the prog public, but showing the influences with an attitude and would have given Tim Smith a huge smile in his face and have Karvus carrying the Cardiacs torch.

The scenery of the Future with the mellotron is very sinister and terrifying on the issues dealing with the big corporations on taking over and getting out of there with The Money Shot as they channel the Lizard-era of King Crimson on the Alternative Pronk (Prog-Punk) opener Singled Out for Battery goes into the pump out rock mode with unbelievable results that would send a shiver down your spine wanting more going into the outer limits of space and time.

Corpses Feeding Underground is a touch of ‘60s psychedelia and a touch of the saxes tooting and guitar chords dueling with the sax playing both at the same time making it very jumpy while The Wretched Fathoms sees Kavus and his comrades go into the Heavy Metal road. You could tell that Knifeworld have a huge amount of humor in them and adding the hard rock genre on the second track, makes it very fun and sometimes head banging with a funny touch.

An Arrival, has this touch of a lullaby gone wrong in an acid folk format that is very mystic and makes you hide in the covers as they go back into the Alternative Pronk in-your-face attitude on Pissed Up on Brakefluid to give it a big roar on the motorcycle riding on the road into the night-like sky. But don’t say that Knifeworld do epics, they do on the 8-minute sci-fi story-telling adventure finale on Me to the Future of World.

Filled with Organs, Synths, Fripp-guitar like sounds, and bass lines and a female vocal, makes it perfect that has a lot of jaw dropping moments of “what the hell did they just do?” Knowing that they pay tribute to earlier Crimson meets Yes and staying true to the golden era of the ‘70s. Knifeworld have a good start and if you want proof, just ask snooker champion Steve “Interesting” Davis.
Posted by znathanson at 2:01 PM