Kayak - Phantom of the Night: The Very Best of Kayak 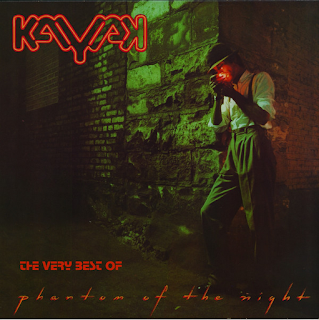 Now while I’m not crazy about compilations and greatest hits albums it would be hard for me to put one here. Progressive Rock has been sort of the cream of the crop in Great Britain, Germany, and Italy, but it has been a different language as it carries through different parts of Europe including the Netherlands which has been to home one of the most important scenery’s of Prog and Symphonic Metal and have a huge cult fan base in their hometown and different parts of the nation to receive attention and packed houses in arenas.

The country is home to bands and artist like: Arjen Anthony Lucassen, Supersister, Focus, Within Temptation, Eskeption, Alquin, and Kayak. Yes, Kayak is still going strong since launching in 1972 by Ton Scherpenzeel and the late Pim Koopman, who passed away in 2009. With their touch of Prog, Pop, and a bit of AOR (Album Orientated Rock) in their sleeves, these songs have bits of the epic, balladry dance, and uplifting tempos that would make you take notice throughout the 40 years they have travelled on the long and winding road.

Phantom of the Night: The Very Best of Kayak is a compilation of 19 tracks that goes through the first nine albums that includes Eyewitness recorded live that give an introduction and history of Kayak’s Prog-Pop sound of the ‘70s and early ‘80s sounds of swirling organs, fantasy, single hits on the radio that would be national anthems, and giving the Netherlands and England a big surprise. It’s quite interesting that Kayak were sort of the under-rated prog sounds as if they would have given ELP a jaw dropping show that would be spectacular and mind-blowing.

All of these tracks will have some of the Prog listeners become Kayak fans from the moment they hear this. From the thumping sing-along sci-fi mini opera song, We Are Not Amused that has a bit of a Glam Rock sound on the guitar, vocals and drums to the Medieval lukewarm crisp love song of Anne while they go full throttle on Total Loss poking fun at the Punk scene. Meanwhile, the 7-minute epic, Merlin which is half of a concept album and a centerpiece on the compilation, has a dramatic opener, touching vocals, riffing guitar lines, symphonic orchestral beauty, and out of this world keyboard sound that almost would have made this piece into a rock and roll movie as if they written the score for this.

The band always was somewhat writing about science fiction as if they were reading Isaac Asimov and Ray Bradbury and Tolkien as well before forming Kayak. You can hear some of the story-telling pieces on ballads like the haunting Wintertime and the dance-like melodies on Ruthless Queen, Starlight Dancer, and Phantom of the Night that is just unbelievable and wishing that you could have written lyrics like this instead of singing about leaves from falling from the trees or hanging on the sunset strip in LA.

Kayak’s music still carries Prog-Pop into another level. They have a touch of the Beatles, Klaatu, and Triumvirat all at one time. Now is this something worth listening to? Absolutely, if you love the four bands I’ve mentioned that have influenced Kayak’s music, this is a starting set to get into and enjoy the solar system ride.

Posted by znathanson at 8:28 PM