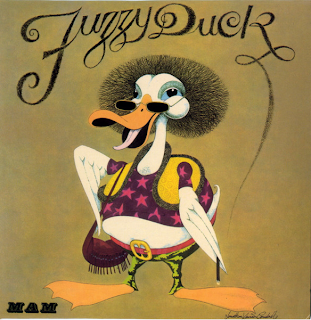 Formed in England back in 1970, Fuzzy Duck was a combination of Heavy Rock music and filling in the sounds of the Mark II-era of Deep Purple, Wishbone Ash, and Uriah Heep in their early days filling with smokin’ guitar licks, swooshing organ sounds, and have a bit of funk in them as well with a bit of the Blues Rock influences in there. It was 1971 and along with the Norman Haines Band’s Den of Iniquity, the band’s sole self-titled debut album, released on the MAM label and now reissued first on Repertoire Records and now with Esoteric Recordings, proves that you can really have a sense of humor and have fun.

While they carry a touch of proto-prog and metal in their belt, they also came from different bands including; Tucky Buzzard, Andromeda, The Crazy World of Arthur Brown, and The Five Day Week Straw People and showed that even though they weren’t about to go into the same route that ELP was doing during that time period, they can do a psychedelic jam session and have a huge freak-out party from the evening until dawn. And while they suddenly disbanded mysteriously, it would have been great to see what they would have done next if they haven’t broken up.

Along with other obscure albums including Marsupilami’s Arena and Norman Haines Band’s Den of Iniquity, this album is still going up for a rocket price on the vinyl format from online stores in prog sites and on eBay for that one lucky fan to spend either $678 or $1,200 to buy the album in its mint condition and cherish it and pass the torch for the younger person to understand about real good music. With its dynamite introduction on Time Will Be Your Doctor that kicks the album off and the soaring adventures on the organ for Mrs. Prout, the music is more of a time travelling adventure and very calming.

There’s also a touch of Blonde on Blonde’s Rebirth on Just Look Around You and the haunting touches of the wah-wah guitar rhythm on Afternoon Out that would have made listeners take notice of them and spread word-of-mouth about them. Then it’s Organ and Bass line sound going into the Funky Blues ‘70s town by going on the road and enjoying the trip on Country Boy while the mellowing soar of Jon Lord’s sound and Ritchie Blackmore in there as if they could have helped the band out on the boogie rocker, More Than I Am.

With a bit of Cressida and Gracious in there on the uplifting 6-minute piece In Our Time, the closing quackiness of A Word From Big D in which someone using the Duck sound makes it as if Disney’s Donald Duck was rapping as the band go boogie for a humoristic funky finale. The bonus tracks which are A & B side singles have a bit of Country, Blues, Hard, and Purple.

Double Time Woman has a crunchy blues hard rock attack mode that is jumpy while the Country tinged celebration featuring the brass section on Big Brass Band makes it a perfect FM hit single. With the fast-sped rocking touches ode to Deep Purple and Ian Gillian on One More Hour and No Name Face, shows that the band pay tribute to them and would give them a pat on the back. Even though its ahead of it’s time, Fuzzy Duck’s debut album is must have collector’s item and deserves to be recommended through the hidden treasures of proto-prog.
Posted by znathanson at 12:07 AM