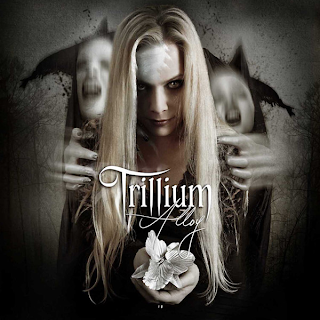 Amanda Somerville, has been around the Symphonic Metal scene as a lyricist and a vocal coach by working with bands like; After Forever, Epica, Kamelot, and working with Tobias Sammet on the metal opera, Avantasia. This time, Amanda has got something up her sleeve with a new project called Trillium and the debut album, Alloy. The influential background of the album rages through Dream Theater, the Damnation-era of Opeth, and Within Temptation.

Going through the debut album from start to finish, it’s quite something and probably most the verifying sounds of Prog and Symphonic sounds that Amanda would bring to the table. She doesn’t pull any excuses and within these twelve tracks, she doesn’t just sings the lyrics like a big rock star, she sings it as a conductor and as a composer by going through the notes from the lyrics that she writes as if she is telling a story in front of an audience that is wanting more.

Having guitars, keyboards, and drums and guest vocalist Jorn Lande of Masterplan whose voice reminded me of the late great Ronnie James Dio and Bruce Dickinson on the Metallica-like rumble on Scream It, the members and the orchestrations here are completely on their mark. They definitely show no sign of a dull note, and it is unbelievably like a thunderstorm waiting for the rain to come in with a mighty push and explosion that is waiting to bring electricity to the roars and lighting that comes with it.

Like most Female Symphonic Metal bands in which they have a beauty and the beast vocals, meaning an angelic and evil grunting vocals like After Forever and Epica to name a few, but here on Trillium, there is no sign of the death grunts as they take the compositions into war. Songs like the thunderous opener Machine Gun, which deals with warfare and feeling that your private life has now been surrounded by what has been going on in the news of the union and starting a war with as the sinister punches of Coward and the melancholic Utter Decension are impressive.

As the vicious lyricism dealing with domestic abuse towards women and seeking revenge on Bow to the Ego will be kind of a surprise for Amanda dealing with a huge issue on the cruel punishment of women being used as slaves, she knows how to deal with these issues that is disturbing and challenging to talk about a subject that is going on in the world in the past, present, and now in the future. And while the goose bumps of the electronic music structures on Pain of Least Resistance and the innovative space retro classical advanced structures of Into the Dissonance, the closing epic of the bonus track, Love is an Illusion, deals with the question “Are we still stuck in the lies of illusion? Is the story of our lives going to keep going and will it ever have a happy ending or not?”

If you really admire the sounds of Symphonic Metal or Progressive Metal, then Trillium’s Alloy is one of those albums that you need to get and deserves a lot of attention to hopefully see a bright long and winding road ahead for Trillium.
Posted by znathanson at 1:00 PM