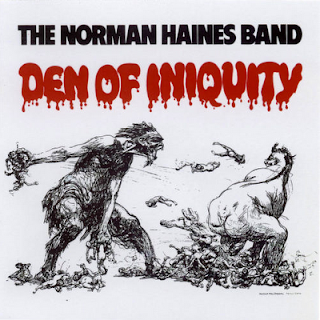 Perhaps one of the rarest progressive rock albums that has been online auctions like eBay alongside Arzachel, il Balletto Di Bronzo, Tudor Lodge, and Blonde on Blonde to name a few, is considered a collector’s item and a cult classic as the original LP released back in 1971 by the Parlophone label, has been finally given the reissue treatment for its 40th anniversary done by the good people at Esoteric Recordings. After Locomotive split up as former members of the band formed The Dog That Bit People, founder Norman Haines, who wanted to stay true to the orchestral brass rock sounds on We Are Everything You See, decided to go into the Hard Rock treatment for his Organ along with different styles of Soul, Jazz, and Folk music.

My guess is when the album was released in the same time period that when Genesis Nursery Cryme, Barclay James Harvest’s Once Again, and Pink Floyd’s Meddle were released at the same time period, this album couldn’t even make it into the big leagues and never got a lot of recognition because Norman decided to call it a day and ended his music career due to debt issues and worked for the GPO (General Post Office). The album and Norman himself were way ahead of their time period and now with the internet and clips of the album on YouTube, it is suddenly been given a huge wake-up call and people want to talk to Norman about his work in Locomotive and Den of Iniquity.

Starting with the fierce driven organ proto-metallic introduction of the title track and the Badfinger Pop elements of Finding My Way Home, are perfect starters of the album to make you understand who Norman Haines really is. Then, it is the hard edge rock revamp take of Locomotive’s Everything You See (Mr. Armageddon), gives a lot of a guitar work which makes the melody sound like the Brass section and while the original version had a jazz-psych classical sound, this version is so harder that it makes you wonder if this piece could have been an FM hit on the radio and a part of the top 10 singles UK chart in 1971 to knock off David Cassidy off the list and make it number one.

Meanwhile, When I Come Down has this keyboard soul groove in the realms of Second Hand’s Death Became Your Santa Claus-era as the acoustic finger-picking haunted Acid Folk elements comes in with Bourgeois before getting ready for the 13-minute epic, Rabbits. Blues Rock Fuzztone-Organ driven style like no other, Norman plays it and knows the score well as it goes into the Psychedelic Rockin’ Jam session for the rest of the piece as Guitar and Bass go into a dueling mode to see who can come up with the best lines in the piece.

The closing 7-minute dooming finale Life is So Unkind is Norman’s homage to the classical composers to create this moody and disturbing view of the dystopian world gone wrong as he plays Rhodes and Organ in the wah-wah section to set the tone of the views and seeing what the Future used to be beautiful before becoming a nightmarish hell as he goes through soft, beauty, and Gracious-like sounds to close the album off. The Esoteric edition features the singles as a bonus track including a single version of Rabbits as it comes with liner notes done by Crimson expert Sid Smith interviewing Norman Haines about the making of the album.

This is a must have album that you need to have in your collection and makes you start looking for clues to find more obscure progressive albums that never saw the light at the end of the tunnel.
Posted by znathanson at 11:19 PM