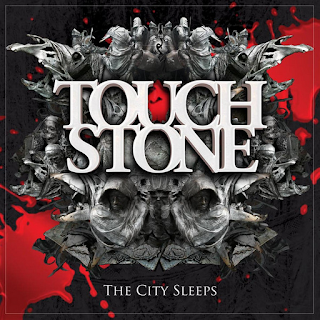 It has been two years since Touchstone had released a studio album since the first two albums (Discordant Dreams and Wintercoast) had been received critical acclaim in the prog community and performing live in the States and in Europe. And it looks like they have finally conquered the rock orientated scene again with their new album, The City Sleeps. While I have supported the five-piece band, I knew that this was a band that would take Prog to another level after hearing the first two albums and damn it, this is one of the most adventurous and yet rock out album that is completely stupendous.

The band have shown no sign of stopping with their love of AOR, Hard Rock, Pomp Rock, and the Prog sounds combined together to make it wonderful, emotional, metallic, and raw. The power of Rob Cottingham and Kim Seviour’s partnership are still the comrades and marines in Touchstone’s music and making the album sound like it’s the late ‘70s, early ‘80s all over again and taking again the Arena Rock format to another level and showing that the genre isn’t dead, but its growing for Touchstone to take that format and seeing where the direction will take them into.

And it proves that they have finally taken the yellow brick road into the right direction at the right level. The opening of Corridors with its heavy keyboard sounds, bass lines, and guitar licks, comes in with a perfect punch while the 10-minute epic When Shadows Fall shows true passion of Touchstone’s new sound. With its atmospheric first two minutes of synthesizers going into the Solar System before paying tribute to Rush for a moment with piano and guitar taking turns, which is quite surprising as it reminded me of Cygnus X-1: Book II Hemispheres as it goes through passages of mourning, hard, and operatic at times.

As they carry the Progressive sound, but with a metal crunch in them on the attacker These Walls and the time changing pace of Good Boy Psycho which has a powering riff and a structured symphonic element that is completely jaw dropping to take it to a whole new level to go for a huge dynamic roar out of the woods. Meanwhile, they head back into the ballad storytelling mode on the touching Horizons, the acoustic crisp on a warm Sunday afternoon with Half Moon Meadow before going back into the epic mode with the 11-minute track featuring a spoken-word finale done by Anna-Marie Wayne, the daughter of Jeff Wayne.

Featuring a film-score like introduction, swooshing guitar sounds filling the rhythm and lead section, and the keyboards including the synth flying down and giving this kick out composition to give us a huge surprising twist. Touchstone have finally come in full swing and they have finally got the torch lit up as they take the next level going for them and The City Sleeps is a must listen to album that is growing out of its flower to reveal all of its glory.
Posted by znathanson at 8:53 PM