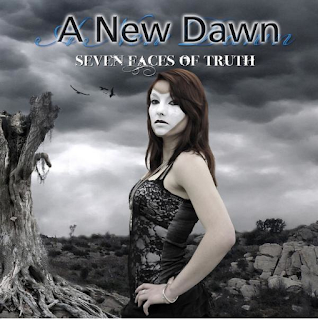 The Netherlands has been home for most of the Symphonic Metal bands raging from; Within Temptation, Epica, and After Forever to name a few, which have a huge cult following, there is one band that’s been around for six years and that’s A New Dawn. Since they launched 14 years ago, A New Dawn have brought the sounds of the Beauty and the Beast concept with angelic vocals and a death grunt like vocals which has been around in the beginning of the 1990s in the Gothic Metal genre, but this seven piece band really have almost put a new foot in the lake to keep the Symphonic and Gothic Metal genre flowing and have shown no sign of turning back.

That and their new album, Seven Faces of Truth, which was released last year, shows the clever and ability to bring death, symph, and prog combined together as one. Some of the time when listening to Seven Faces of Truth is a bit sinister, lullaby gone wrong, torture, and a bit, of a dystopian world gone wrong in the 15th century which is shown on the blooming turned nightmarish Composition of Life, which deals with forgiveness and the feelings of pain and the nonsense that is going in the world today and feeling that doom is coming.

While the drums sound like a machine gun going off that includes the double bass drums and the guitars sounding like K.K. Downing and Dave Murray, it really sends a chill down your spine and makes you wonder how a band deals with lyrics on depending doom. The high-speeding roar of lightning on Contradiction which is a segue from the opener of a female patient dealing with schizophrenia short spoken word speech on My Name is Dawn, goes off like a flaming bush that explodes into the darkness while Desire has the chops of Opeth and Nightwish, it still pounds a few explosive energies to come at you.

Meanwhile, the 7-minute epic Theatre of Fears, is a mini-symphonic death metal opera and is a combination of; ballads, vicious metallic thumps, annihilation, isolation, and feeling alone to fight and defend for yourself. And I bet they were listening to some of the New Wave of British Heavy Metal bands like Iron Maiden and Venom and playing Dungeons and Dragons to take the listener to a huge level of amazingly guitar structures that becomes almost a live fan favorite.

Now while I’m not crazy of the Beauty and the Beast arrangement, I do respect the work that some of the bands are using have some of the scenes in Europe in the Metal genre use that in the Symphonic sound to get the crowd and fans wanting more of this. Seven Faces of Truth is not an easy album to listen to, but getting around to it about three times, is a kick-ass record and they need attention for other bands to be a part of the Symphonic Death Metal scene.
Posted by znathanson at 11:30 AM