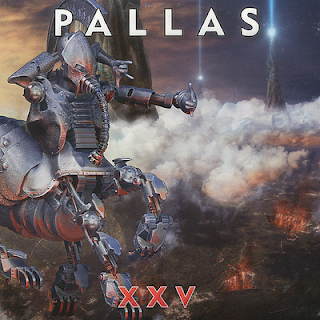 Sequels might have mixed feelings among avid filmgoers and music lovers. Take a look at what Queensryche had done with Operation Mindcrime II set 18 years after the events of the first album and fans have sometimes embraced it while Dream Theater made a second part of the Metropolis composition and turned it into a steampunk 1920s rock opera. But for Neo-Prog pioneers of the ‘80s, Pallas decided that it was time to release a sequel set after the events of The Sentinel to create a wonderful story-line in the realm of science-fiction and dystopian world that has gone horribly wrong.

After Alan Reed, the original singer of Pallas left the band last year due to creative differences, the band enters a new singer name Paul Mackie and the result here on their new album, XXV is an amazing concept storyline and prog at its best. Paul’s voice has kept the sound of Pallas growing strong and even though he’s been in the band for a good while, he keeps his voice to the strong forces like no other and the twist here is that this is an album that could be one of the most surprising albums to come out of this year so far.

From the album’s opening yet soaring yet pounding crunch of Falling Down to the guitar and organ powerhouse that would give you goosebumps in the realms of the Momentary Lapse of Reason-era of Pink Floyd with Crash and Burn that has almost a Roger Waters meets Neil Peart lyricism beauty of the Cold War that places into the core of explosive reactions on what is going in the modern world that we are facing in. Something in the Deep sees keyboardist Ronnie Brown paying homage to the atmospheric sound of the early Tangerine Dream-era with dreamland passages that sets the aftermath of what has happened to the beautiful world that was peaceful now is in hell.

The haunting Monster takes the listener into a dark and yet hidden passageway with a fierce guitar introduction that Niall Mathewson brings to set the sneering Fripp-sque sound that sends chills down your spine and look into the darker views of hell ala Dream Theater Scenes From a Memory-era style! The 6-minue epic, The Alien Messiah is a fierce composition with heavy guitar sounds, disturbing climatic instrument duels, as the band give a chance to go full throttle while XXV part one a rumbling electric structure with keyboards and spooky vocalization that Mackie does in a double tracking sound to give that dark sound on the views of the modern world that have a rock operatic way.

Pallas have shown that they can go a little bit heavy metal as you can hear it on the fierce and menacing approach on Young God with Mathewson’s guitar playing goes into the realm of Kirk Hammett as Mackie sings like the Phantom of the Opera and feeling the lyrics as something that he punches through the gut as he sings his heart out as Sacrifice shows them into an AOR approach as they pay tribute to Rush’s Signals-era with more of the fierce guitar sound that is breathtaking as Mathewson’s playing is dynamic and jaw dropping to get you ready for the big approach.

The moody and spookiness of Blackwood and the Celtic New Age rock beauty Violet Sky comes into together as one like a diamond in the rough with its acoustic finger picking guitar layered sound while the lyrics deal with how do you survive without struggling as makes it a very dramatic piece to the number as the final track of the second part of XXV is almost like an epic film score in an orchestral scenery in an underwater sequence set to beautiful music as Ronnie Brown takes his keyboards on a twisted yet wonderful amazing journey with his sound to the listeners as Mackie singing. He gets it and hitting the notes pitch by pitch and sound like a glorified wall of sound that makes the bricks explosive.

Since 2011 is a great year for Prog, this is an album that really will strike the listener’s ears to buy all of Pallas catalogue. And they have hit it at the right place at the right time. And even though I’m not crazy about the ‘80s neo-prog scene, this is a wonderful album and the music itself has taken it step by step that is like a sci-fi rock opera for the final cut. This has got to be almost the best prog album of the year for 2011 and you need to buy it.
Posted by znathanson at 7:00 PM