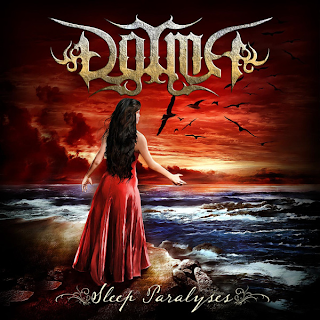 There’s something out of the ocean in the realms of the Symphonic Metal genre. Already having two Promo CDs for about two years, The six-piece band from Finland are the next answer to Tarja and Amberian Dawn, Dotma made it very clear that they wanted to make their debut album, Sleep Paralyses, almost like a combination of Gothic and Prog Metal with a fantasy storyline that is straight out of the Knights of the Round Table-era or out of the Lord of the Rings trilogy with an orchestral metallic crunch.

With wearing all black and almost looking like their paying tribute to the female fronted prog metal bands that might have made it quite clear that they are not going to rip off their heroes, and proved to the metal scene that they weren’t going to rip them off, they are going to do it their way with a mighty punch like no other. Like giving birth to a newborn, this album clocks in for about 51-minutes and if you’re ready to take those extra time, fasten your seat belts because it’s going to be a long night.

It’s hard to say about singer Johanna Lesonen, but her vocals sound almost like Sharon Den Adel meets Heidi Parviainen and there is some operatic momentum into her voice including songs like the shredded guitar powder keg opener Legend of Blackbird and her duet with Vladimir Lumi on Reborn is something that could have been used for Wagner’s symphonic rock metallic operatic version of Rheingold. But the sound is fierce, acoustic, classical, and emotional featuring some heartfelt melodies on the soothing orchestral beauty Indian Fall, the views of a dystopian world on Whispering and the haunting power metal epic, The Cave, makes Sleep Paralyses a much better album, rather than picking a track off the album.

While Johanna’s voice is mind-blowing, the band members deserve a lot of credit to work on this album, because there not just A band, but the band to prove they can bring the power and the force for her voice to shine like a diamond. And with a militant machine gun sound on the drums done by Joonas and lead and rhythm guitar sounds between Leo Saarnisalo and Niko Kalliojarvi, they bring the tension and fierce energy to come with it.

And add Keyboardist Harri Koskela and bassist Aapo Lindberg, you’ve got one hell of a weekend to sink your lion’s teeth to have a big giant steak over! They work like drill sergeants especially on the 10-minute epic mini rock opera, Kingdom of the Sky as they duke it out in the ring as a boxing match to see who can win the best instrument or vocals to win the grand prize, but they’re all winners while the final track, Memory Worth Dying For is a Prog Metal at its finest with some soaring organ sounds, fierce guitar lines, and moving bass lines as Johanna carries a calm after the storm on her vocals, while the last 3-minutes becomes a medieval metallic dance movement in various stages of epic proportions.

It’s their beginning into the Symphonic world and one hell of a debut from the metallic world of Finland, but if you love Within Temptation, Amberian Dawn, and Nightwish, you probably need to buy this album and you can see where the influences that Dotma pay a huge homage to the big three of the Female Symphonic Metal scene.
Posted by znathanson at 12:44 AM