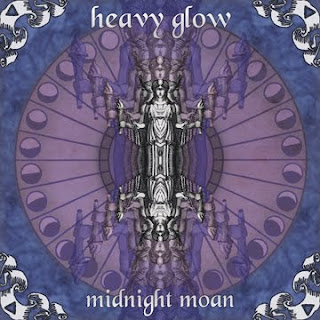 After releasing The Filth & The Fury last year that sort of brought the sound of Psychedelic Hard Rock to grab you by the throat and making you scream and shout, ‘70s retrospective rock trio, Heavy Glow have decided they have scored another touchdown and looks like they decided to give it a huge juice and powerage to bring it to an explosive shockwave of mind-boggling proportions. Midnight Moan is one of those albums that the trio decided to give it a real tug for all of its glory for moving into the sounds of Zeppelin, early Floyd, Sabbath, and fierce reminiscent of High Tide’s Sea Shanties that qualifies the energy and fierce electricity of the golden-era.

Jared Mullins vocals and guitar playing has certainly come a long way and his sound brings a Iommi like sound on the guitar while bassist Joe Brooks psych fuzz bass lines will remind listeners of Geezer Butler and Jack Bruce and drummer Dan Kurtz brings a lot of the ingredients for his drum work throughout the entire album and here they bring the force like a blazing fire flaming the gasoline. This is an album that should really get filmmakers like Quentin Tarantino to get the band to do a film score for one of his upcoming films and make it a mind-blowing movie set to wonderful ‘70s rock like no other.

That mentioned, such explosive tracks will get your blood vessels going like the train chugging blues metallic opener Lose My Mind and the psych garage rock fuzz warmth of hell on Slave Drive. Meanwhile, get exercised and pumped up for the lukewarm haunting atmosphere on Today is Technicolor (One Step Closer) which could have been used in Lars Von Trier’s controversial film Antichrist as All My Children goes into the realm of Zeppelin’s second album as Jared Mullins takes the guitar into Jimmy Page-sque roar into town and makes it deal with greed and betrayal.

They aren’t just a rip-off band to say they messed up this or that, just the way they got it right and the sound of these three men make you realize that something’s going on here as you put them in the studio and finding out that the roller-coaster ride has only just begun. Thus, the swirling whirlpool of terror of fierce obscure proto-prog hard rock comes in handy on Collide and the homage to Black Mountain’s In The Future-era with a bluesy feel on Purgatory Blues.

More of the haunting beauties come in handy are Smithereens in which it makes it sound like a sequel to Stone Temple Pilots Big Empty as the closing 7-minute track, Diggin’ A Ditch sees the band going thru the realms of Doom Metal in a fierce and wonderful tone as Joe Brooks rises in to shine to take turns as he brings sneering bass lines to help Jared out and lets him know that he’s with him all the way.

It may have some music lovers scratching their heads to decide whether they want to put them in the category either in Prog or Doom Metal, but here’s a little warning, play this Motherfucker loud and you will be completely blown away. It’s a must have who admires High Tide, Mighty Baby, early Zeppelin, Wolf People, and Black Mountain.
Posted by znathanson at 10:44 PM