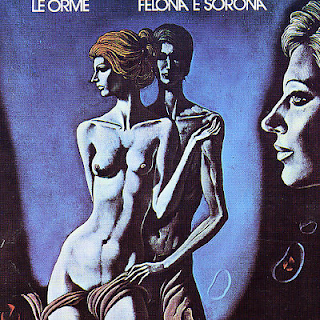 The concept album that gave Le Orme a chance to break the door down for the Italian Prog bands to sink their teeth into, the story about two different planets one filled with joy and love while the other filled with isolation and darkness that remains one of the finest albums in Progressive Rock history in the Italian structures. Released in 1973 on the Philips label and then on Charisma, this marks the first time here the English version translated by VDGG’s Peter Hammill, that would have the trio lending their voices in a different speaking voice that is beyond the beyond.

Le Orme decided to give the dark sci-fi rock opera with haunting passages, ELP-sque time changes, and classical folk boundaries which would have given George Lucas pissing his pants if he had heard this album from start to finish while he was writing Star Wars. Keyboardist Tonu Pagliuca, Vocalist/Bassist/Guitarist Aldo Tagliapietra, and drummer Michi Del Rossi, they wanted to set the tone of the outer limits which combined them to go into space and time and not just that, but to give the listener a real jolt whenever he or she listens to the album and makes you think that this isn’t your typical hero-save-the-day nonsense, this is a dark adventure that you are about to embark on for years and years to come.

That taken care of, Felona E Sorona is a dark and beautiful storytelling fairy tale that will send a shiver down your spine. Beginning with the swirling keyboard nightmare territorial Sospesi Nell’Incredible (In Between) and the folksy embracement Felona, each of the members could have written a score for Disney’s Fantasia. The homage to Emerson Lake and Palmer is very spot on with La Solitudine Di Chi Protegge il Mondo/L’Equilibrio (The Maker) while the spookiness of the annihilation on Sorona describes the loneliness and the pin drop of the city that Paglicua does to set the atmosphere on Ritratto Di Un Mattino (The Plan) and then it all comes down the sneering climatic climax between both planets as they fight in the jaw-dropping thunderstorm finale on Ritorno Al Nulla (Return to Naught).

Throughout the piece you can tell that each of the band members were having a showdown as they clash the instruments from the keyboard giving a sinister composition and then bass and drums come in as they go in a battle to see who can give the ass-kicking around, but the three members are both winners and show that this isn’t just a game, this is music and how they can send score so good, you won’t believe your ears. The deluxe edition features again the English version that was meant for David Jackson to come and help out and give Le Orme a VDGG feel, but never saw the light of day which the record label felt that he was too “ahead” for the band’s sound.

It’s a shame that Jackson’s sax music wasn’t used, but it would have been great to hear how it would have sounded like with the sneering sax for David to use on the concept album. The English version might have you scratch you’re heads, but the original Italian version is one of the most mesmerizing albums to come out of 1973.
Posted by znathanson at 12:21 PM