William D. Drake - The Rising of the Lights 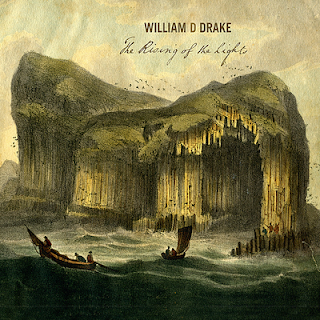 Like a crossover alumni album takeover between Egg’s first album and Gentle Giant’s Acquiring the Taste, former member of the Cardiacs, William D. Drake and his new album, The Rising of the Lights is a very fun and quirky album in the realm of the two bands that has a whimsical sense of humor that carry the sounds of the Canterbury scenery. Throughout the entire album that has twelve tracks on there, written and conducted by Drake, the album has a mysterious and dark passageway of a haunting musical set in the late 1890s and Drake discovered and understood the scenery and he takes the listener into a journey into the gothic side of London.

Though it plays like music for a twisted ballet, Drake is a true mad scientist and is very damn good when he plays the keyboards, he plays it very well. He isn’t like Wakeman or like Emerson, but more like Kerry Minnear of Gentle Giant and Dave Stewart of Egg, plus his vocals will remind listeners of Richard Sinclair from Caravan/Hatfield and the North. He is no fluke, nor showing off, but showing you how he can take the listener by the stroke their jacket and take them to a world have they never seen before in all of its glory.

Songs like the romping introduction Super Altar and Ant Trees have a whimsical feel inside the English Countryside to write funny pieces in a Beatle and Caravan-sque way while the mellowing touching beauty on In An Ideal World deals with the 18th century world of London as if it the music was set to a steampunk film and the Victorian scenery would definitely fit the atmosphere right on the street alley. Then we get to The Mastodon.

Featuring thumping drums, swirling piano and mind-blowing organ sections, it makes it a perfect dance move that would have audiences gasping and completely blown away as Drake plays it like Dave Sinclair that provides In The Land of Grey and Pink-era. Then, on Ornamental Hermit it becomes a mournful yet tear-drop orchestral dark beauty that deals with the 19th century families in England and how they struggle to maintain a normal life as it goes back into the picture with the time-changing thump of Wholly Holey reminds me of Hatfield and the North, another antidote of Canterbury homage right in there.

You have to admit Drake has a sense of humor and I might believe the Canterbury Scene might had a huge impact in his childhood days growing up as he goes into the Jazzy night time with piano and drums on the title track as he does a lot of Thelonoius Monk passages in there to set the jazz-psych spook thrills in the atmosphere. While the psych hip-hop short of Song in the Key of Concrete is operatic, the haunting composition between a male and female duet vocalization on Me Fish Bring has sort of a late ‘70s vibe. Zieger has a 1920s sounding as Laburnum sounds like a mournful funeral song.

Then we get to the last track, the 9-minute Homesweet Homestead Hideaway, which starts off as a cat purring and then it goes into the storytelling complex song and has us asking, “what the hell did he just do here?! This is amazing!” He gives the listener a chance to listen throughout the track and gives us a chance at the very end to decide where the music goes through here. How much did I enjoy the album? Well here it is.