Locomotive - We Are Everything You See 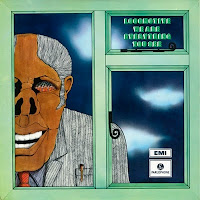 Locomotive were something of a weird psychedelia symphonic band, no guitar, just bass, organ, drums, and keyboards which seems to go very well, but adding the vocals of Norman Haines and you got yourself and early beginning of classical rock music. They had the ingredients of psychedelic meets symphony rock combo with special powers to add the sounds of The Nice, Beatles Sgt. Pepper-era, and The Move.
As you can imagine right from the start from a huge sandwich, the results of their debut album, We Are Everything You See, were very odd – and it remains odd to this day. But it remains a collector’s item for any psychedelic nut. When the band released this unbelievable album in 1970, it didn’t sell a lot of copies and never got the attention it needed and was lost in the treasure of unheard classics. You may began to wonder that this and Locomotive were completely way ahead of their time. Using a brass section which featured the late Dick Heckstall-Smith of Colosseum, Chris Mercer, and Lynn Dobson along with a horn section that definitely brings the album’s house down, they rejoiced in the sound of that sound including, eerie lyrics, walking bass lines that were very fusion-like sound as an homage to Bootsy Collins, and cool drum patterns. Weird, difficult, post-apocalyptic, jazz fusion meets the Moody Blues meets The Nice might add it up. But maybe or maybe not, you are the judges ladies and gentlemen.
Whenever the music became too poppy or seemingly a rip off of Tommy or S.F. Sorrow, Locomotive’s music always bring a light to the end of the tunnel for a symphonic fusionesque rock opera. There are five centerpieces from this album that definitely caught me by surprise when I’ve first heard this album thanks to Lee Dorrian’s how to buyers guide on the Prog Psych albums to listen to before you die. The string quartet of the Overture opens the album as it segues into the pounding explosion of Mr. Armageddon mixing with a twisted organ solo, roaring brass section, and Jazz bass lines that almost came straight out of a Caravan album. More of the Jazz fusion homage in the beginning is the balladry turned big band psych of Now is The End, The End is When, featuring Mick Hincks explosive bass introduction that was almost a tribute to the Soul scene and paying tribute to a younger version of Bootsy Collins. The sinister Lay Me Down Gently is very eerie and disturbing that almost could have been a song for a mystery Hitchcock film or a Mario Bava film that would set the atmosphere of Groovy horror technique. Yet, one of the best from the album is the finale, Time of Light and Darkness. This song has a very jazzy upbeat tempo, but the most surprising moment of the number, features the Mellotron which creates a spacey ambient movement to the number which makes it a cool acid trip for a great way to get moving to the beat, probably seeing the true identity of Locomotive’s music as if to imagine that The Moody Blues and of course, Barclay James Harvest could follow up the albums arrangement to follow their symphonic inspirations or dare I say the Canterbury scene for Egg to be influenced by them.
After the release of their debut album, they released another single, Roll Over Mary, before calling it a day in 1971. Ahead of their time and lost beyond the infinite, Locomotive’s only debut album is a lost gem and way up there along with other lost classics including; Aphrodite’s Child 666, Arcadium Breathe Awhile, The Trip’s debut album, and Marsupilami’s gorefest conceptual rock opera Arena, But We Are Everything You See is the tour de force lost classic that you must buy before you pass away to see god in the heavenly sky.
Posted by znathanson at 11:47 PM