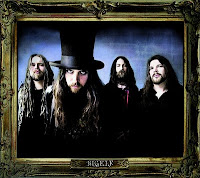 How many newcomers of unbelievable reformations of Progressive Rock bands can you name? I bet you can name a few. I’ve praised some of the new bands like; Heart of Cygnus, Blood Ceremony, and Astra to name a few. But this band, holy shit! You definitely need to buy this album and play this motherfucker up to high voltage. It’s been a great year for reissues, new bands that are coming out of the woodwork and Bigelf is definitely one of them.
Among supporters including James Blunt, Linda Perry, Courtney Love, Alicia Keys, and Dream Theater drummer Mike Portnoy, it is indeed a supporting approval of the future of Prog Rock’s circle has come with full electricity. Not only did Portnoy brought the band on the Progressive Nation tour in October of this year with Zappa Plays Zappa and Scale the Summit in the United States and Canada, but in Europe also which they are signed with Classic Rock Magazine’s independent label, Powerage and Linda Perry’s label, Custard.
It’s really a big push forward for them, but whether you call them; stoner metal, space rock, experimental rock, or progressive metal, you could definitely smell the spaghetti to accept the total mass retain of this four piece band from Los Angeles, California. It’s worth the carriage in your intention that Cheat the Gallows, their fourth album since forming in 1991 to pay homage to a prog-psych version of Deep Purple MK I & II-era, you can basically say that Damon Fox’s vocals are spot on and how it’s been a long road for them to being an underground band to supporters of the Prog Nation tour with Dream Theater. So let me get to the review. This is what is going on here with Cheat the Gallows that will take the listener to boldly go where no prog-head has gone before or beyond before for all prognuts to go crazy over them. And let me say this, their fourth album and me getting into Bigelf, this album here, doesn’t upset me one bit. Add the candy bars of ‘70s rock with; T. Rex, Black Sabbath, Rainbow, Pink Floyd, Deep Purple, and Yes, and you got yourself and full weekday and weekend to chew over which would make Damon Fox a powerful vocal mastermind almost looking like a psychedelic version of the Mad Hatter. But there’s more to put the quarters in the video game machine in the 11 track list of the album’s independent masterpiece.
Ambient and Atmospheric sounds of Led Zeppelin battling it out with King Crimson-esque enthusiastic beats, frequently to the scenery of a early ‘70s glam rock sound of Slade and David Bowie’s Ziggy Stardust-influential power chord and riffs in the wall of progressive hard rock that, most of the up and coming bands, would make Bigelf sounding like endeavors and masters of the universe. But their influential backgrounds makes a lot of huge loops, almost becoming a part of the New Wave of Progressive Metal, to offer a sensational beauty with Cheat the Gallows which would make Bigelf very goddamn happy! The carnival-circus opening rocker is becoming rich and famous with The Gravest Show on Earth and battling it out with the epic of Rush colliding with ELP and Deep Purple on Hydra and the neo-classical turned twisted of Counting Sheep and then, going balladry in a psychedelic twist with the eerie single Money, It’s Pure Evil, sinister and heavy with the Hammond organ to explosive hardness tribute to Jon Lord with Blackball while Superstar and The Evils of Rock & Roll deals with humoric views on being a rich god in an homage to King as the 5-minute closer Demon Queen of Spider is almost an eerie psychedelic sci-fi soundtrack that sounds similar to Led Zeppelin’s No Quarter meets Psychedelic raga meets flaming hard rock that is almost an alternate soundtrack for of a Star Trek episode which completes Cheat the Gallows in a roller-coaster ride of hard psychedelic progressive metal, a futuristic rock opera in a beautiful style in a lukewarm existence. No bullshit, Bigelf are absolutely motherfucking amazing.
Posted by znathanson at 11:43 PM