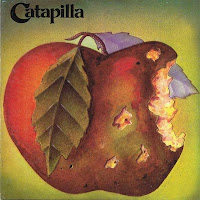 This 1971 release was the album that would make Miles Davis so proud of with Jazz Prog rockers Catapilla and their underground roots, helped with the soul sound vocal arranging of Anna Meek and Robert Calvert’s (not the member of Hawkwind, but a different Calvert) heavy sax solos. Seemingly to come out of the end of the ‘60s and out of the blue like a bat out of hell, in seriousness the band weren’t like the Mahavishnu Orchestra or Renaissance – their self-titled debut album was high voltage to make Catapilla’s West London sound for the Jazz Fusion throne of Gods and Goddess.
The band was formed in 1970, Catapilla was a seven piece band which featured Anna’s sister Jo in the line up before she left to form Julian Jay Savarin for Julian’s Treatment, the band performed at various clubs in which they got some attention including Patrick Meehan, who was a manager for Black Sabbath, was completely blown away and got them signed for a record label, Vertigo as the band came into the studio to record their first album. By now, it proves that there’s no holding back by performing 15 or 24-minute compositions that will make your head fucking spin. Even now, can you imagine a strange band name like Catapilla instead of Catapillar? Get the idea?
Catapilla’s debut album is one of the most innovative albums to come out of the underground world that is mind-blowing and powerful at the same time. But the album itself is shattering and beautiful. With an amazing 15-minute opening introduction of Naked Death, it features some sinister vocal arrangements done by Anna while the rest of the band throughout the whole composition, do a funky jazz groove. The sax is wailing and the guitar is doing a wah-wah solo while the bass and drums flow with beats per measure which seems very eerie and almost recorded in a dark and cavernous studio that hadn’t been used for a long time, but it still sounds fucking amazing almost like a glass that’s about to break and there’s no one to stop it. Alongside Naked Death, there are two short numbers that are straightforward and very hard rock. Tumbleweed is basically a dance number. Adding the touches of the Big Band-era almost as if Duke Ellington were alive he would have been a member with a jazz version of Led Zeppelin. Very good with a hard edge, its like nothing you’ve ever heard before in the music scene of the early ‘70s. Promises intersperses funky hard fusion with a wah-wah guitar work again along with the scariest vocals that Anna does that kind of peaks in with a dramatic midsection that is very almost like a marching beat that would make you have goosebumps all around you and then goes into a hard funkadelic beat to close the number. And if that wasn’t enough, it leaves room to close the album with the 24-minute arrangement for Embryonic Fusion, which was sampled by Psych and Underground Prog DJ and founder of Finders Keepers Records, Andy Votel for the Vertigo Mixed compilation, is a tour de force epic that goes from an opening bass line, saxes flying off the wall to an jazzy atmosphere that is similar to Colosseum’s Valentyne Suite. Beginning with Anna’s calm then shrieking vocals that are powerful and disturbing, you began to wonder what the hell is going on here. The lyrics are very interesting; ‘Living with me/a rose/into me/a cavernous waste/into me/a deserted shore/Into me/a thunderous cave.’ Almost like a score for an erotic suspense thriller.
After the release of the self-titled debut album, Catapilla went through one more various line up. After releasing Changes, the band decided to call it a day. It’s still a band worth listening to.
Posted by znathanson at 11:49 PM