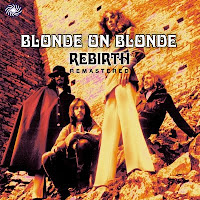 While the underground scene that was becoming a swinging set in London throughout the sixties, and could have been considered either psychedelic or progressive, few of them had a less of a surprising sound no other than Blonde on Blonde. Their music wasn’t stadium or arena rocking sound, but it was original rather than playing Dungeons and Dragons or a copy of King Arthur and the Knights of the Round Table. Taken their name from Bob Dylan’s landmark album in 1966, they were formed in 1967 in the music scene of Newport, South Wales when they originated as a Blues band, but from various members of the band and becoming a five-piece helped them move away from their own roots into more psychedelic and even folky experimentations to forge into the sound of music.
No other psychedelic band sounded different, but with the release of their second album, Rebirth, released in 1970 from the Ember label and now with the indie label, Fantastic Voyage to give it an astonishing reissue to end the year of 2009, is one of the best examples of both their magnified and stunning sound from their own musical background. The reissue album features new liner notes including two from the late Tommy Vance and notorious Rolling Stone critic John Mendelsohn talking about the praises about this lost masterpiece and featuring the single version of Circles as a bonus track to make your mouths watery.
Rebirth begins with Castles in the Sky, one of the most lukewarm atmospheric sounds of a 15th century English storytelling turning into a psychedelic dreamland machine with the music section that is coming straight from the minds of Procol Harum. Broken Hours and Heart without a Home are simply love songs setting the scenery of the Hippie Movement and the disastrous Vietnam War; Time is Passing and the 12-minute epic Colour Questions, one a tribute to Arthur Lee and Love while the other is a middle-eastern style twist of the Doors featuring a sinister guitar laying fretwork that sets the boundaries throughout the magnum opus; Circles is an eerie number with an acid rock style that will make you feel very stoned to access; November, a heavy Folk Psychedelic Rocker to Tim Buckley and Jim Morrison; and the finale You’ll Never Know Me/Release, a keyboard layered song that shows the band singing about renewing to their dearest Mother. In the last song, you can definitely tell that the band were wearing clothes that were very much Science-Fiction. All of the pieces coming together as one, in the piece of all this is renewing the world and building a better life for the human race, living a new life and seeing what lies ahead of them for the future while Release had a very Floyd-like ending with the Piano and the Acoustic Guitar setting the mood of a Brand New Day as it flourishes to give it that surprising ending up towards the heavenly sky. You get the general idea, Blonde on Blonde’s music was more of a psychedelic progressive pop rock sound of the early ‘70s and very quiet and calm, turning into Love for two-minutes and Cressida for seven-minutes.
But Rebirth wasn’t just about music. The vocal arrangements of Gareth Johnson along with the drumming techniques of Les Hicks are masterminded and evocative resemblance of an early Freddie Mercury and Ringo Starr. Guitarist Dave Thomas, who wrote the liner notes 10 years ago said of Rebirth: “I think you can hear that contrast in the music itself: a mixture of focused energy and laid-back calm. It was a reflection of the way we lived and worked. We all came from a heavily industrialized Welsh seaport that was closely surrounded by mountains and wild romantic countryside; it was the contrast that inspired us."
Posted by znathanson at 10:54 AM