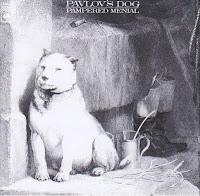 For David Sukramp, who’s vocal arrangements similar to Rush’s Geddy Lee, Pavlov’s Dog’s debut album, Pampered Menial, which was released in 1974, is a lost classic to new heights, and featuring magnificent mellotron arrangements while adding the guitar to give it a lushful eerie solos that could have been apart of their next album, At the Sound of the Bell. Also, adding the fact that it’s very album-orientated or shall I say pomp rock to say the least which it isn’t, but their debut album is very crystal clear and very catchy at the same time.
Let’s not forget, this is a remarkable and powerful record, which would have made Pavlov’s lead singer Sukramp not a household name in the AOR industry, but a cult band at the same time for 35 years, which has a real kick to it if your are a Rush fan as you enjoy the album from start to finish. Listen to the heavy and ballad rockers including; Late November, the shattering power chord riffs of Song Dance, and the homage to the wild west of the eerie ballad, Fast Gun. While you listen to these songs, you can hear a band’s influential backgrounds with the hard rock sounds of Led Zeppelin and Deep Purple as if they formed together in St. Louis.
While the acoustic fingerpicking ballad of the opening number of Julia, which could have been the hard rock love song of all love songs, Natchez Trace is a pounding and sinister number with a Yes influence as if they were metal to the core. Theme from Subway Sue is very hard-edged. It has a very balladry moment on there to give Sukramp’s vocal arrangements to reach the high notes in a climatic ending. One of the most unbelievable songs that is beyond the prog rock tendencies are the lukewarm pieces that would have been perfect for the dance floors. Episode which almost reminded me of Meat Loaf’s Bat out of Hell, has an emotional violin solo at the beginning and Sukramp’s vocals along with the emotion to go along with, here’s a surprise kick to the number, almost a funeral or a break-up song to say goodbye to a love one as the piano sets the scenery in a crying atmosphere that will have tear-jerker’s go fucking nuts over to.
And then, this is where the two-part finale kicks in. Preludin begins with the violin playing in a renaissance festival which is a tribute to Jethro Tull and Gentle Giant, with some medieval boundaries to the core as it fits the musical quality for the finale with Of Once and Future Kings, which is very sci-fi and futuristic at the same time also as if Rush were listening to this number during the making of 2112. It starts off with an amazing guitar solo and the vocals setting the scenery. Then becomes a fast rocker for a split second then heads back into the baroque 15th century mellotron atmosphere of a waltz while the drums come in out of nowhere to do a triple as it goes back into the hard rock boundaries again, with the guitar going Floydish and very experimental at the same time.
After the release of Pampered Menial, the album got excellent reviews from Max Bell who considered them the ‘future of rock. There was also tension in the band and their manager who at the time decided to let Sukramp leave, but he refused. After the release of At The Sound of the Bell which was released in 1976, the band decided to call it a day. Still to this day, Pampered Menial remains one of the most underrated albums or a cult classic album to be preferred along with Pink Floyd’s Dark Side of the Moon, it remains a magnitude: Ahead of their time and nothing like we’ll never see again in the near future in the 21st century for new bands to follow Pavlov’s Dog and the torch to carry the Pomp Rock industry of the ‘70s
Posted by znathanson at 12:06 PM