Rick Wakeman - Journey To The Centre of the Earth 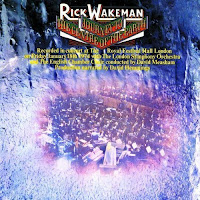 After Rick Wakeman left Yes in 1974 with the infamous Tales From Topographic Oceans Tour, he wanted to do something that was quite interesting and out of the blue to say the least when he released this bombastic concept album based on the Jules Verne story and record it live at the Royal Festival Hall including Blow-Up Star the late David Hemmings to provide as a narrator and of course, the London Symphony Orchestra and the English Chamber Choir to go along with the structures of the live album.
The story of the explorers who decided to come up with a crazy idea to go into a world of science, mystery, and thrills into a fantastic ride to go in the bottom of the earth’s core as if it were a rock musical done by the work of Mr. Wakeman’s keyboards of the Moog and synths that seemed perfect for a theatrical film version of the story and helped by the orchestra and the choir to give it a taste of mass productions to make you feel sure that you are with Rick and the tribute to Jules Verne as if he’s rolling in his grave as if to say ‘This is brilliant! A Rock musical of my story?! What a good idea!’
The pieces are set into four segments; The Journey, Recollection, The Battle, and the Forest. The Journey starts off with Rick and the Orchestra going into bombastic mode with a synthesized classical percussive and horn choir take as the two vocalists Ashley Holt and Gary Hopkins sing like angels to introduce the story for the travelers to go inside the core of our home planet.
Recollection begins with Wakeman’s Moog’s going into an underwater adventure as if the Moog was at the bottom of the sea coming up with some dynamic compositions while the bass and drums do a dramatic pounding to set the scenery and then it becomes pretty for one second and then KABOOM! It becomes a funk mixture ala Yes style throughout the each of the band members while guitarist Mike Egan comes up with a bluesy funk sound on the guitar. One of the most explosive takes in Rick Wakeman’s album of Journey is The Battle, which starts off as a sinister glorious introduction done by Wakeman, pounding, spinning, and around in circles at the same time as the band and the vocals come together into a symphonic pretentious freak-out with Choir and Prog Rock gods coming together as if they were Brothers dueling it out who would win the entire performance throughout the show.
The finale of all finale’s is The Forest which starts off as a calming down moment and then becomes Ragtime for a few seconds while the vocals and the choirs sing like gods to give the Explorer’s singing about their journey and how they felt in sometimes disbelief and shocked over their journey as they returned home to Hamburg and received the good news about the dangerous adventures of the bottom core of the planet Earth. While the band is going on, its Rick’s turn to shine as he plays the Moog like Gandalf and then all of a sudden you could hear at the very end along with the orchestra pieces of Edvard Grieg’s In The Hall of the Mountain King as the percussion and choir while Rick is playing the riff also, mind-boggling isn’t it? And then it ends with a dynamic climax of both the band and the orchestra and choir to reach the high note and then ends with a standing ovation from a roaring applause. Mushrooms, Crocodile Teeth, and Volcanic adventures?
Surely, Rick doesn’t get much attention nowadays, but now he remains a celebrity in the UK doing Rick’s Place on Planet Rock Radio and also a Grumpy Old Men of Keyboard among Keyboard maestros, but he’s still remembered for bringing Jules Verne’s story to life in a Rock Orchestral style.
Posted by znathanson at 11:54 PM