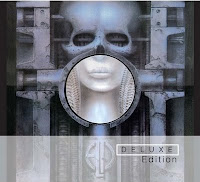 ELP were one of the most superb and the best supergroup to come out of England and probably the gods of the Progressive Rock genre in the early 1970s. They received a dynamic performance at the Isle of Wight after ending the Mussorgky’s piece of Pictures At An Exhibition by using cannons to fire out of the audience, wowing them, and of course having a love-hate relationship with the music critics who either gave them an superb review or calling them snobby or pretentious. And also, the punks who called them boring dinosaurs as they were on the wanted list to be killed. But they never stopped as their Tarkus war machine slammed down on them as they run to the fucking hills.
Keyboardist Keith Emerson, who was one of the most controversial musicians during the late ‘60s, put knives in the organ to give it a disturbing noise and most infamously setting fire to the American flag when he was in The Nice at the Royal Albert Hall after performing Leonard Bernstein’s America. Greg Lake, bass and guitar player, had already achieved a following while he was in King Crimson on the first two albums and then comes Carl Palmer whose dynamic drumming blew the bands of The Crazy World of Arthur Brown and of course the Heavy Prog Rockers, Atomic Rooster.
The band knew they wanted to push the buttons and give the classical music composers the middle finger after performing Pictures and Nutrocker from Classical Music into a mind-boggling sneering work of bombastic proportions, but on the 3-CD deluxe edition reissue of Brain Salad Surgery, their fourth album, shows them to go where no band had gone before with Synths, an explosive piano concerto, and folky ballads rolled up into one. Disc 1 is the original album which begans with the explosive take of religious rebellious of controversy with William Blake’s Jerusalem. When then band decided to release it as a hit single, it wasn’t released in the UK and by the BBC because they felt that doing a religious song and turning it into a bombastic rock song was a disgrace of their Christianity. ELP’s homage to Alberto Ginastera’s 7-minute Piano Concerto first movement Toccata, gets a run for the money with using drum synthesizers and bombastic keyboards done by Emerson and Greg’s bass playing scaring the shit out of listeners with its eerie time signatures that go off the wall. Meanwhile lukewarm watery acoustic ballads done by Greg Lake with Still You Turn Me On, Ragtime brawl Scott Joplin piano lovers with Benny The Bouncer, and the 35-minute Space Rock Opera with a little help from King Crimson’s Peter Sinfield on Karn Evil 9.
Disc 2 features two singles that were featured on Works Vol. 2 the jazzy fusion of When The Apples and the erotic operation of the title track, unreleased versions of Karn Evil 9, and the first mixes of Jerusalem, Still You Turn Me On, and Toccata while the backing track of Karn Evil 9: 3rd Impression is a glorious instrumental piece. Meanwhile, in comes the NME Flexidisc 1973 RPM of Excerpts from Brain Salad Surgery which came with the newspaper as to let the music lovers heard what they were going to be excited with.
Disc 3, is actually the 5.1 Super Audio CD format of the album. I was hoping for a New Stereo Mix of the album in its glory, but its not bad, but really fucking good. The inner sleeve talks about the making of the album including the meeting of HR Giger who famously did the work on Ridley Scott’s Alien, designed the sinister front sleeve of BSS. 35 years of bombastic music and Karn Evil 9? Not bad for a show that never ends over and over again.
Posted by znathanson at 10:18 PM