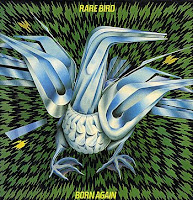 After the release of their fourth album, Somebody’s Watching, Rare Bird decided to call it a day, but they decided to release one more album as a farewell to their fans with Born Again. On this album, released in 1974, this shows Rare Bird moving away from the eerie glorious days of the first two albums; Rare Bird and As Your Mind Flies By, into a little bit of commercial and mainstream appeal. But what their final album does, is to have the band to do have a good time and just enjoy the music in the highway of the past, present, and future.
I always felt that lead singer Steve Gould was trying to be more of singer-songwriter, but he kept the tempo going while the other musicians Dave Kaffinetti, bassist Andy Rae who replaced Nic Potter of VDGG fame on Somebody’s Watching were trying to come up with some beautiful movements on here including drummer Fred Kelly. Amazingly, along with the first three albums were heavily magnificent, coming together with harmonic melodies along with ‘70s rock beauty that would be perfect to dance with, the reissue on Born Again is all in all exhilarating as previous Progressive Rock bands that tried to make it in the limelight, but received an underground following today.
The beginning track, Body and Soul, is an upbeat acoustic electric piano dance number that would definitely be a fitting piece that could have been on Fleetwood Mac’s Rumors. What the song is about even though life is hard through stormy weather, you still have your own choices with your soul no matter what the cost depending how you control the situation. Also, they bring their eerie sounds to the core with the organ to pay homage with an almost tribute to As Your Mind Flies By on Peace of Mind which is their tribute to their song, I’m Thinking as an emotional ballad with Kaffinetti’s Organ setting the scenery of the piece.
For all of its lukewarm pieces that comes through Born Again, there are some wonderful songs that would make the ladies ballet to this. The dazzling chugging acoustic Redman has some characterization between Steve Gould and the harmonizing background vocals while Harlem sounds almost like a lost Elton John song from Empty Sky. Almost as if Christine McVie of Fleetwood Mac could have been a part of Rare Bird, the electric piano and the Moog synthesizer comes in the picture again as an elegant soul tone on All That I Need that provides a love story.
Meanwhile, Lonely Street is motivated by slick guitar chords, warm bass lines, and a dark tone on the keyboards which almost the song is telling about the streets of San Francisco, California and is almost a Todd Rundgren song and the final number, Last Tango in Belulah which starts off as a Fusion Medieval number in 4/4 time signature and then becomes a smooth jazz ballad about living in the streets to do one more tango for a beautiful night in the fictional town of Belulah. While the bonus tracks Don’t Be Afraid sounds very Steely Danish from the Aja sessions and Passin’ Through becomes a mourning ballad.
Still, Born Again is an admiring and an exciting recording that could still be a part of the Rare Bird catalogue and part of the Esoteric family for Prog lovers to enjoy the music like a time machine that won’t stop forever.
Posted by znathanson at 2:39 PM

I recently came accross your blog and have been reading along. I thought I would leave my first comment. I dont know what to say except that I have enjoyed reading. Nice blog. I will keep visiting this blog very often.