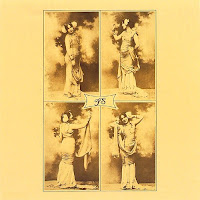 Its one of those albums that would make you be surprised over what the hell they were doing and how they could push the prog button a little further when they released their second album originally released in 1972 with their take of a concept album based on the 15th century city that was mysterious in the heart of Brittany, France but was destroyed by the sea and it remains a mystery and became a legend for medieval historians. For il Balletto Di Bronzo, YS remains one of the most strangest and heart-pounding albums that this short-lived band released among the Italian Symphonic Prog scene and there’s no excuse about this from beginning to end.
But when you listen to this, you might get the feeling that Cedric Bixler-Zavala and Omar Rodriguez-Lopez of the Mars Volta fame were listening to this album during their At The Drive In days and knew they wanted to push that experimental market and give the mainstream music scene the middle finger. But let’s talk about the album and the maestro of di Bronzo. Giani Leone is almost a god on the keyboards as he goes ramming speed to give you the tension and the tendency of proto-heavy metal and paying an homage to King Crimson at the same time also that remains inside the pudding while Gianchi Stringa is almost Keith Moon meets Bill Bruford style on the drums, Lino Ajello is a mad scientist on the guitar and Vito Manzari plays some crazy notes on the Bass. The music of course, is fantastic.
The concertos on YS are strange but mind-bogglingly fantastic: The 15-minute Introduzione starts off as a haunting soundtrack to a Mario Bava movie as it begins with a ghostly female choir crying in the background vocals and then the organ comes in to give it a deeper sound and then it becomes like a chaotic scenery gone horribly good with the Moog and then the sneering heavy guitar work that is like a bat out of hell while the organ and the scat solo goes into a freighting mode to make you go for more. Primo Incontro is very high voltage as time signatures and instruments go together like a shredded splicer going up the walls very fast and then the last few seconds sound very baroque Italian classical music that seemed perfect for Mozart, Secondo Incontro reminded me a bit of the Jazz Fusion band Area meets King Crimson at their stop-and-go moments that includes a freak-out moment at their peak, Terzo Incontro is actually a guitar going haywire but in a weird magnificent way as the music is more of a driving force 4-minute and 33-second tribute to the Scandinavian symphonic band of the ‘70s Trace and to Dario Argento’s Profondo Rosso, Hard Rock fusion style, and the 11-minute finale, Epilogo, could only be described as the sound of Italian young men who had a degree in Music in Performance ala King Crimson style that’s very avant-garde and almost paying an homage to The Sailor’s Tale by the Crimso in this haunting melodic beauty. You could almost hear a pin drop as the band go into a scary mode attack that is the perfect choice, you couldn’t let go of it as they blow the door so fucking hardcore, you are 100% scared shitless from this point on.
So far, a new generation of fans who are getting into the Italian Symphonic Prog scene need to get heavily into bands like; PFM, Banco, Le Orme, and Murple’s Io Sono Murple before going into the deeper waters of obscure Italian prog rockers; but YS is the definitive album of Bronzo’s career before calling it a day in 1973. So if you are ready to listen to this album, be prepared and turn this motherfucker up really loud!
Posted by znathanson at 10:55 PM