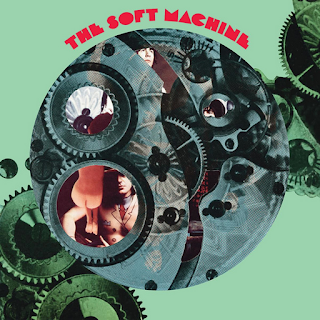 1968, the year when music started and the world changed. Martin Luther King and RFK were assassinated, the War in Vietnam was still going on, and the riots were in flames. It wasn't until this group from the Canterbury scene that took the psychedelic scene in london that took the genre of Jazz Fusion and Experimental music into another direction. The Soft Machine is one of the bands that took that direction with their self-titled debut album with a taste of instrumentals, Robert Wyatt's mellow vocals and his drums, Kevin Ayers using a speaking tone with the Bass Guitar, and Mike Rateledge's fuzztone organ that would set the world on fire!

I have enjoyed listnening to this album and the group also. They were the true pioneers in the Canterbury Progressive Rock-era. Apart from this, they don't back down to this because of the way they constructed the music from start to finish. Everything on their debut album is like a clean jewel that has been restored and waiting to buy it for the perfect person to enjoy.

Since this album has some amazing cuts on the Soft Machine debut album, there are some crazy tracks that they push it close to the edge. For example, the 7-minute instrumental experimentation 'So Boot If At All' which is is them doing some strange instruments that carry the Syd Barrett tradition of 'Matilda Mother', 'A Certain Kind' is the warmer taste on riding in your SUV on a beautiful sunday afternoon with Robert Wyatt's lush vocals and the story of the girl he loves to be and marry with while Mike's jazzy bebop sound on the organ.

The two rockers 'Save Yourself' and 'We Did It Again', pushes the Soft Machine into Proto-Prog-Punk territory that his beyond hell and chants of a revamp tradition of the Kinks 'You Really Got Me.' 'Lullabye Letter' is filled with anger and frustration song as Wyatt talks to his girlfriend in the song while having sex and making love as the band becomes a fuzztone sound of Pink Floyd.

Other tracks including the mellow heavier two part introduction of 'Hope for Happiness' is a class of proportions of Wyatt's skeleton's in the closet side, the low-key anthem of organs for the Trumpeter's narration of Kevin Ayers speaking tone of voice in 'Why Are We Sleeping?' and his prog fusion of techniques of space in 'Joy of a Toy.'

They were pre-Floyd and pre-fusion back in those days. They were showing their true side of the music scene of the late '60s than Jefferson Airplane and Cream were doing. The Soft Machine's debut album is a pro-choice and early punk prog to get you cookin'

Posted by znathanson at 9:21 PM