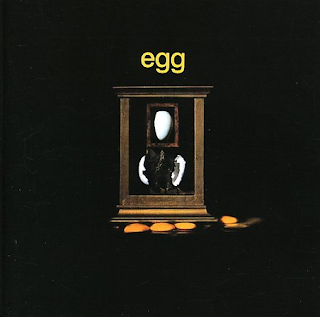 If there was one band that took the Canterbury Prog scene into dangerous musical asylums, it would be Egg. Egg was a trio similar to ELP, Soft Machine and Le Orme. They had the mixtures of fuzzy organs, classical bach traditions, and english country garden avant-garde Jazz metal. So they weren't your typical bombastic and gigantic Moog Synths that Keith Emerson had for Karn Evil 9, but more of a trick of the tail twist of evil nature of forbidden fruit.

Their debut album released in 1970 simply called the self-titled album Egg, is a massive arranging and composition of pure weirdness. From the opening carousel jazz like number of 'While Growing My Hair', which is more of a tradition of the Soft Machine's early days in the late '60s more of 'Joy of a Toy' type of introduction. As I mentioned before, they have a classical music style and pay tribute to Johann Sebastian Bach of the Tocatta suite with the fusion and classic organ like sound of 'Fugue in D minor',

'I will be absorbed' is more of a jazzy feel, and the full length version of the next suite in its entirety because of some situations of the rights issue with one of the composers with 'Symphony no. 2 in 4 movements.' You have the Zappa feel and the Edvard Grieg fast tempo organ tradition of 'In the Hall of the Mountain King' into a canterbury version of The Nice that will have your head explode!

Egg had a small fanbase in Europe, but the group would later relase two more albums (The Polite Force and the Civil Surface) until they broke up in 1975 with their last third album. Today, there's an archival album called The Metronomical Society which features BBC Sessions, and rare live recordings in Egg's true style of insanity!