The Mars Volta - Frances the Mute 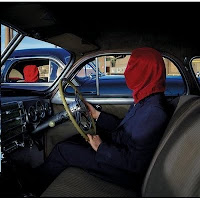 After the relase of their debut album in 2003, The Mars Volta's career almost turned into a difficult situation. Jeremy Ward who was the sound manipulator on the Tremulant EP and the De-Loused album, passed away of a heroin overdose. He was relpaced by Juan Alderete who was part of the Thrash Metal scene in the 1980's with Racer X. The Mars Volta would later do another concept album based on a diary that Ward discovered while working in the Repo business. The album deals with Family Searching, darkness, betrayal, love, and regret. All of that and Frances the Mute is the true bodyslam of Progressive Rock.
It starts off with Cygnus...Vismund Cygnus which begans as a calmer guitar introduction and then it goes into experimental territory with odd time codes, King Crimson meets Miles Davis of the Bitches Brew-era. This track shows that they ain't turning back for no reason. The Widow has more of an eerie and darker ballad of Pink Floyd's Remember a Day; The next three tracks are truly in your face punk salsa prog rock. L'Via L'Viaquez shows their Hispanic roots of Latin music with Electric Harlow sounds and Fusion guitar styles that Rodruigez does paying homage to Robert Fripp. The next two epics show their atmospheric and punk edges top ticket to the outer scorches of oblivion.
Miranda That Ghost Just Isn't Holy Anymore is a mixture of Can and a bit of Funeral Rock music that will send you to the chambers of hell and beyond the outer limits. If you're ready to take the next challenge get ready for an epic suite that clocks it up for about 30 minutes! Cassandra Gemini is a true Progressive Rock suite because you need all the ingredients for a mad jam session. This is a combination of Van Der Graaf Generator meets Bad Brains meets Faust with a bit of a String quartets and the ending of a reprise of Cygnus in the classical guitar mode. Not bad for a band to get the concept album going with the help of Pink Floyd's artwork man Storm Thorgerson to make a strange album cover that is almost similar to The Division Bell in a car format. You never know what will happen next.
Posted by znathanson at 4:11 PM